The Puuuurfect Start to a New Year

How a sequined headband turned Chamblee upside down 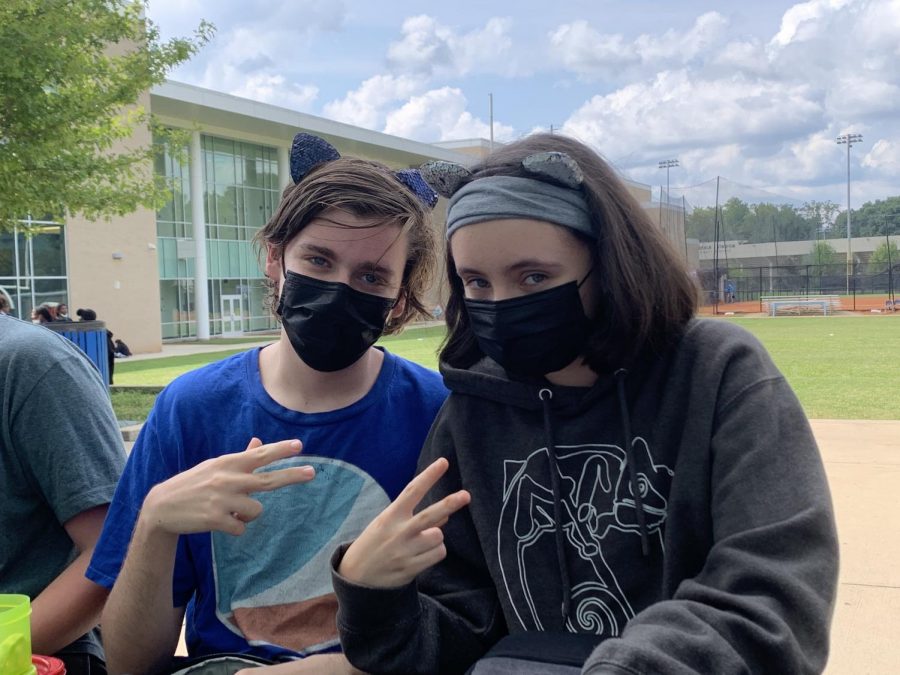 Usually, students want to start the year off with a bang. This year, however, freshmen at CHS started it off with a meow. Somehow, cat ears that are usually saved until the big football game against the Dunwoody Wildcats have found their way onto the class of 25’s heads, and soon the entire school’s.

This started before school was in session, when freshmen Max Potawitz and Eitan Heled decided that they’d wear cat ears as a joke.

“It started off as a thing that I did with Max, kind of as friends. I had originally worn cat ears to our Dungeons and Dragons game. And so I figured, Hey, you know, [I should] wear them at school they’re pretty comfortable. So we did and people asked us, ‘Can I have some cat ears?’ So we brought some cat ears and people liked it,” said apparent trend co-starter, Eitan Heled (‘25).

On the first day of school only one student was wearing cat ears, so it was almost a game to find him in the halls, but within the week the cat ears multiplied.

“Everywhere I went there were sparkling cat ears; it was interesting,” said senior Hailey Lupton (‘22).

The cat ears piqued many students’ attention and often caused a good amount of discussion, bad jokes, and playful taunting. Some Chamblee students found the cat ears to be very strange and didn’t intend on joining in.

“I think if you wear them every day, or unironically, it’s mega cringe,” said student Owen Trestrail (‘23).

Other students didn’t seem to care quite as much.

“People do what they want. It’s weird but they’re not bothering me,” said basketball player Ted Tzavaras (‘22).

After a while, a few seniors started joining in once they received a free pair from Max and Eitan. Some stated that it was their last year, so why not do something fun. Many Tiktoks and Instagram posts were made, one even receiving more than 600 likes.

“I don’t know anything [about how the ears started]. I don’t know,” said red-eared Tanzila Jamal (‘22). “I’m honestly just wearing them because I thought they were cute!”

The cat ear wearing freshmen weren’t opposed to the idea of upperclassmen wearing the ears, in fact, they encouraged it.

“If it’s just the freshmen, everyone thinks we’re crazy, right? But the fact that some of the upperclassmen actually think it’s cool; it makes me feel more comfortable wearing them because I’m not just a crazy freshman anymore,” said Noah Tullis (‘25), who is a friend of Heled and Potawitz.

Soon, teachers were in on the trend as well.

“Teachers at this point are asking, you know, what’s up with the cat ears. I explained [it to them and now] some teachers are wearing the cat ears, which I think is really cool,” said Heled.

While some teachers didn’t have cat ears on, they proved to be really into them.

“We thought they were cute. I assumed that it was some sort of inside joke among the freshmen. It must’ve been like unique to a friend group. I was a weird kid in high school, so being there, normally you do weird things and I just didn’t think it was that big of a deal,” said Mrs. Postema.

Seniors started receiving the cat ears for free, thus encouraging them to wear them more often.

“At first I looked at them strangely because I’ve never seen something like that before. But later, one of the freshman gave me two cat ears and I wore them all day and I realized how fun they were,” said Student Body President Joanna Louis-Ugbo (‘22).

Others have turned the ears into a fashion statement.

“I actually have multiple colors to go with different outfits,” said Nardos Aynalem (‘22).

Heled has been receiving a lot of praise for their cat ears and is excited to keep this going as long as possible.

“Honestly, everybody was super positive, just nice. So many people came up to me saying, I love the cat ears, you know, cool cat ears can have some cat ears. I brought some cat ears and people wore them. It was just a super fun experience,” said Heled. “I personally planned to wear the cat ears for a while, at least just because it’s actually very comfortable and it keeps my hair in place.”

While the occasional teasing may have started off as a funny joke, it quickly turned sour.

“I saw that some of the bullying was kind of funny in a way, but it’s only funny if both of the parties involved know it’s like a good joke,” said Charlotte Freymann (‘25). “It became unfunny when you could see the dynamic between the more popular “jock” boys bullying the kids that don’t have a lot of friends. When the dynamic switches between friends joking around to actual bullying, that’s when it becomes not funny.”

At first some people thought it was part of a protest to fight the rising rates of homeless cats but that motive was soon disproved.

“We were at a D&D game and Eitan, my friend, showed up wearing cat ears and my stepmom was like, oh, I have a box of these. So we were like, oh cool. And then we started wearing cat ears and then I’m like, you know, let’s wear them to school. That’s really how it started,” said apparent co-starter Max Potawitz (‘25).

For a few weeks, the rumor was that the freshmen were known as the “Kitty Kat Kult”, or just the “Cat Gang.” It has now been disproven by Dr. Connor and other administrators that this is not considered a gang because there is no violence included in wearing cat ears.

“I heard rumors going around the school that it’s gang activity [and] that we’re all wearing cat ears because we’re all wearing similar clothing. And like all of my friends have been talking about how Chamblee [staff] must be seriously bored if they think that cat ears is gang activity. When other schools are seriously dealing with people being beaten up with gangs and stuff, Chamblee [staff] must be bored. [Admin] must need to have something to talk about man, going after kids with cat ears,” said Tullis.

The situation escalated even further when one sophomore crossed the line by placing cat food in front of a student wearing cat ears.

On September 2, 2021, during the club fair, the club “No Place For Hate” gave out many stickers to whoever asked. These stickers soon found their way throughout the hallways but the stickers were turned into yet another joke against the cat ears. The “H” and “E” were replaced with “C” and “S” turning the new stickers into “No Place For Cats.”

It started becoming more and more noticeable that the seniors weren’t the ones bothering the freshman. In the videos of the bullying, there is only evidence of sophomores and other freshmen yanking off the cat ears and flushing them down the toilet.

“I teach sophomores and seniors, and the seniors are no longer as interested in it. From my perspective of the seniors, they seem to be like, that was funny for a moment, but we’re past it. The sophomores are still pretty intensely focused on it. If I mention cat ears, they all groan and then start telling you that they’re very anti cat ears for whatever reason,” said Mrs. Postema.

Tullis recounted a time when their cat ears were snatched off of their head.

“I got mine grabbed yesterday by some sort of upperclassmen who was holding them above my head,” said Tullis. “Like I’m annoyed by it, greatly annoyed by it.”

It was getting to the point where many people were asking for the administration to step in. On the morning of September 7, 2021, Vice Principal Ferrun Johnson stated on the announcements that Chamblee was “no place for hate” and that this is a loving school. This was met with lots of laughs. The administration was not joking though, soon people started posting about how they were getting fined and were asking people to stop sharing the videos of them destroying cat ears.

“That [feels] like [administration talking to us] would be a little bit intrusive.  I’m not sure how [administration would] deal with handling this, but I feel like them stepping into each class and explaining to kids why either, wearing cat ears is unhealthy to the students because of all the bullying or why bullying people wearing cat ears isn’t healthy? I feel like it’s intrusive and would, you know, shut down everything altogether because afterwards people would be both people who wear them and people who wouldn’t wear them would be uncomfortable,” said Tullis.

Now that bullies are being tracked down because of their actions, many of them are begging others to stop sharing the videos of them ripping the ears off or flushing them down toilets in fear of being kicked off of their sports teams or getting permanent marks on their transcripts.

At this point, students have started defending the cat kids by joining in on the cat ear festivities or confronting those who have bullied them.

“Yeah. I mean, [I] started [wearing the ears ironically], but now it’s kind of- this is going to sound cringe and like over the top- but it’s kind of like an anti-bullying thing because I feel bad for them and I feel bad for the kids that don’t have the confidence to stand up for themselves and that are getting bullied for it. I know there’s people that know that they can’t really bully me because I won’t care. I feel like it takes people that aren’t in that social hierarchy of being the bullied kids to stand up for them,” said Freeman.

Those past their underclassmen years often feel like they can be a positive role model through a piece of sequin fabric.

“I like wearing them because I like the idea that maybe if more people would wear them, the underclassmen, who were starting to actually experience bullying for them, would feel more comfortable wearing them,” said Aynalem.

Many of the students at Chamblee have little to no tolerance for such a small fashion statement being turned into Chamblee news because of bullying.

“A bunch of my friends are wearing them to sort of support the people who were being bullied and just say [to the bullies], ‘Hey, no one cares. Shut up,” said blue-eared Julia Artigue (‘22).

Even while dealing with all the negative connotations around the cat ears, the freshmen have persevered, have continued to look on the bright side, and are excited to see where this goes.

“Even though I didn’t really intend it to be kind of a group thing, I think that it’s kind of turning into a little community, a little almost friend group and I think it’s just really cool what it’s become,” said Heled

For those interested in some free cat ears, Podawitz and Heled will be passing them out every two weeks, first come first serve.