Chamblee’s Jaywalkers Must be Stopped 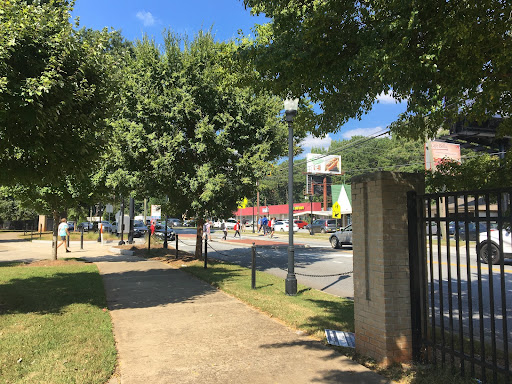 Students walking across the street without the red light flashing

I live in the Murphey Candler area, so getting out of that neighborhood is pretty easy for me. From my house to Chamblee Dunwoody Road only takes me about three minutes. I then make the right turn onto the semi-windy road and keep a steady pace for another two minutes. Then, I hit the traffic.

In the morning rush hour traffic is to be expected, so it doesn’t bother me. What does bother me is the reason for this traffic. Students randomly cross the street whenever they want, making cars stop and go, causing back-ups all the way down the road.

Now don’t get me wrong, I know students are supposed to cross the street but there is a specific time for that to occur. “When is that time?” you may ask. Well, the answer would be when the little man lights up. Oftentimes, I see students who don’t even wait at the crosswalk’s pole before walking, they just cross the street assuming everyone will stop for them. Sometimes, students don’t even make it to the crosswalk, they just cross wherever they see fit.

On September 29, I left two minutes later than I usually do, so by the time I made it to Mendelle and Chamblee Dunwoody, it was already 7:55. The road was a bit backed up and I was a bit infuriated because I already knew what the issue was. I decided to be positive, though. I had convinced myself I’d be able to make it to the school parking lot in a few minutes. “It is only a couple hundred feet away,” I thought.

As I started creeping up, I could see the bigger issue and immediately knew I wasn’t going to make it to school by 8:00. Even though the crosswalk lights weren’t flashing red, students continued to cross the street willy nilly. Some were kind enough to use the crosswalk, but a few people darted across the street hoping not to get hit. This inconsistent flow of students crossing the street whenever they wanted, caused cars to stop every five seconds, only letting one car through every minute.

This constant stopping and starting has now caused traffic as far back as I can see and probably further.

The time is now 7:59 and I still haven’t made it across the crosswalk, but I see hope. There is a break in the students long enough for at least five cars to get past. I was the second car in the lineup so I could definitely make it. I sit in my car screaming “Go! Go!” wondering why we haven’t moved. “We can beat them if you hurry!” The car slowly starts to move forward but then comes to a stop. I scream “What now!” only to see the passenger door slowly open and someone getting out.

The driver stopped their car right in front of the crosswalk so that their passenger could make it to school on time, without thinking about the people behind them. I’ve seen this multiple times and so have my friends. Sometimes, parents will pull over into the shared center lane and drop off their children there. The students will then cross the street wherever their parents stopped, causing another delay.

Not only is this annoying, but it’s also insanely dangerous. If a person driving by doesn’t expect a passenger door to swing open, this could cause damage to both cars and maybe the driver. If the student hops out of the car without looking, they may get hit. If a student decides to walk across the road without looking, they may get hit because the person driving down the street is expecting them to cross at the crosswalk.

It is now 8:01 and here I am impatiently waiting for the driver and passenger to finish their conversation and for the 30 or so students to finish making their way across the street. I finally make my way across the crosswalk and wait another three minutes for the light to turn green so I have enough space to make my right into the glorious parking lot.

It is now 8:05 and I’ve pulled into the parking lot. I walk as fast as I can and finally make it to class at 8:09. Despite all the roadblocks, I made it to my first-period class on time.

The crosswalk has been a constant issue since my freshman year. Back then, students would cross the road with no crosswalk and risk accidents. I don’t remember exactly when it was added, but at some point, lights were set up to safely get students from the Dandy’s Donuts shopping center to Chamblee. When it was first added, I always saw Mr. Johnson directing traffic. He would tell students to push the button and only walk when the sign told them to, just like a normal crosswalk.

He continued doing this for a while, but after some time people caught on to the idea of waiting for the red light, so it was unnecessary. Then, the pandemic hit, and just like a lot of other school norms, crossing the street at the correct time went out the window. But I feel like this is something the school could try to fix.

As a proud member of the Chamblee High School Community Facebook group, I’d like to say I’m not alone in this belief. Some parents have taken to the Facebook group to complain about the constant traffic caused by parents dropping their children off by Dandy’s.

One parent on the Facebook page complained that the emails weren’t working and that some extra precautions should be taken like hiring a security guard to stop the parents from dropping their kids off across the street. Some parents disagreed with the idea of telling parents where they could and couldn’t park because we don’t know everyone’s situation and they may have a legit reason to drop their children off across the street.

There were a few more responses that included previous failed attempts and a city plan that was never passed that would’ve made drop-off easier. The last comment was from a person who played a neutral party. He pretty much said that we can’t judge others’ situations but he understands the anger behind the traffic. He proposed that instead of hiring a security guard to tell parents to stop dropping off their children there, Chamblee should hire a security guard who will get students to safely cross the street, just like how Mr. Johnson did years prior. I like his response the most. This would be a great solution if it were possible.

This is just a guess, but I think that the resource officers we already have are completely booked with all the new trends a few students have participated in. Due to the “devious licks,” stolen cat ears, milk cartons being thrown at bathroom walls, firecrackers, etc., my guess is that the resource officers are already pretty busy. Their goal is to make school safer for students, and with one officer managing buses, one officer managing parking, and the third watching the main building, we are left with no one else to watch as students cross the street. The other administrators also have to make sure that no more students are trying to start a new trend. For this reason, I think getting an administrator or resource officer to help traffic would be close to impossible.

Another solution would be getting an officer from the city to stand there and direct traffic. In front of Marist, there is a crossing guard that helps direct traffic. They’ve had them there ever since I can remember and it seems beneficial. For the first few weeks of school, at the end of the school day, we used to have a Chamblee police officer that would drive up to the Pierce Drive and Peachtree Industrial intersection and direct traffic, so all the buses made it out easily. We had another Chamblee officer who would sit and watch traffic in the mornings after the new median was added in. They often made sure drivers weren’t going the wrong way.

This new median along with the officer set a president that has since been followed. I suggest that the Chamblee police come back for two more weeks and set the precedent of only crossing the street when the white light shows up.  I feel like this would help students acclimate to the idea of waiting to cross the street. We all know at this point how to properly cross the street, so I don’t see how it’s different. I think a little reminder will help.

Unfortunately, it seems that the only way we can get the police to come back is by constantly emailing the county, given it is private property and not school property until they finish crossing the street.  It is also partially the store owners’ job to get in touch with the county, as well, if they feel it is as big of an issue as we do. According to this Facebook post, the few officers that have been dispatched and were mostly people of color had to encounter many entitled and rude parents. It is now part of the parent’s job to also call out entitled parents if they see it.

I have high hopes for the future of crossing the streets, but as of now, I do not like this crosswalk situation. It is annoying, dangerous, and has caused major delays on multiple occasions. I would love for something to be done to prevent this from continuing, but I have set my standards low and I don’t expect to change. I will continue to leave at 7:40 and just accept the fact that I will be late to school if I leave my house at 7:42.