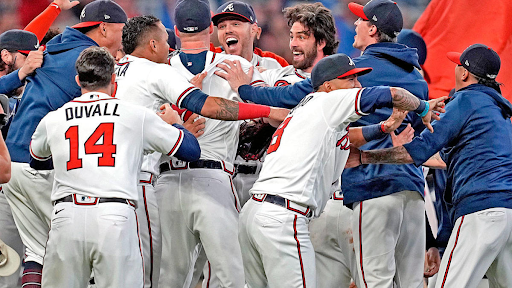 For the first time in over 20 years, the Atlanta Braves are in the World Series. After beating the Milwaukee Brewers in the Division Series and triumphing over the Los Angeles Dodgers to claim the National League Pennant, the Braves take on the Houston Astros in a best-of-seven set to decide the 2021 Worlds Series Champions.

At Chamblee, talk about the series is making its way into the classrooms. High schoolers, almost exclusively born between ‘03 and ‘07, are experiencing the excitement of an Atlanta Pennant for the first time.

“When we won the championship series, I lost my mind,” said Isabella Pappas (‘23). “I’ve been waiting for it all my life.”

On Tuesday, the Braves won 6-2 to take game one in Houston, then lost 7-2 on Wednesday as the Astros pulled the series even. Now, the series will come to Atlanta over the weekend for games three, four, and five, before heading back to Houston for a potential game six and seven.

“Really I’m just hyped for it to be something live going on in Atlanta,” said Immanuel Reynolds (‘22). “I feel like it’s a big statement, a big attraction to the city.”

Eyes all around the country are on the Braves, and Chamblee High is no different. Heading into game three, Braves fans around the school reflected on how Atlanta has gotten to this point, despite a slew of injuries and tough breaks.

“It was a struggle. It’s been a long time coming,” said Katherine King (‘22). “But they definitely put in the work for it […], they worked hard, even with our whole outfield having injuries or unfortunate circumstances. […] I don’t think anybody saw this coming when Acuña got hurt and we lost Ozuna. But here we are.”

The first setback of the Braves’ season came in May, when the club’s left fielder, 2020 Silver Slugger winner Marcell Ozuna, was arrested in a domestic violence dispute and placed on administrative leave, missing the remaining four months of the season. In June, young Braves pitcher Mike Soroka, a 2019 All-Star, experienced a complete re-tear of his Achilles tendon, the very injury from which he was soon to return. Perhaps the most devastating blow to the Braves, however, came in July, when the team’s prized talent, outfielder Ronald Acuña Jr., tore his anterior cruciate ligament, cutting his MVP-caliber season short. Combined with an assortment of relatively smaller injuries — the Braves played seven different players at catcher in 2021 to compensate for the break of starter Travis d’Arnaud’s thumb in May — many thought that Atlanta was out of postseason contention by mid-summer.

“When Acuña got hurt, I thought we weren’t even gonna make the playoffs,” said Levi Bradham (‘23).

At the trade deadline, many expected Atlanta to sell, effectively forfeiting their playoff chances for this year and hedging their bets for next season. Instead, Braves general manager Alex Anthopoulos made a series of trades to acquire players, improving the team in the short run. These moves saw outfielders Joc Pederson, Eddie Rosario, Jorge Soler, and Adam Duvall coming to Atlanta, resulting in an entirely different starting outfield than had been featured at the start of the season in April. The trades turned out to be instrumental, as those four players combined for an average .834 on-base plus slugging (the average OPS in MLB in 2021 was .728) with Atlanta in the regular season, helping to turn the Braves’ mediocre season around and resulting in the Braves clinching their fourth consecutive National League East title. Most notable for many fans, however, is the way that these players, and particularly Rosario, continued their streak into the postseason.

“It’s been great, getting everybody that we got at the trade deadline, and they’re all stepping up for us,” said Jay Krueger (‘22). “Especially Eddie [Rosario].”

“Eddie Rosario, he’s the one player [I’m watching],” said Connor Pressnall (‘22). “I mean, he’s been so clutch for us all postseason.”

Despite everything that has been thrown at them this season, the Braves have continued to thrive against the opposition. Now, they have a chance to reverse the narrative on the Atlanta sports “curse” of choking leads in the playoffs that has followed the Braves throughout the postseason since the ‘90s, when they were reverse-swept in the 1996 World Series by the New York Yankees.

“Atlanta is known for making it big and then not finishing the job,” said Fabian Walker (‘23).

As the series moves on to game three, some fans are hopeful for redemption for the Braves.

“I don’t even want to get into how many times we’ve just ‘Atlanta’d it’ and were just ultimate failures,” said Chase Pelletieri (‘22). “This is our chance to recover and I think this whole city knows it. […] So I’m just hoping for the best, hoping for good games. […] I just want to win.”

Others are less cheerful about Atlanta’s prospects.

“Predictions? The Braves are gonna sell like always,” said Colton Jimenez (‘23) “But obviously I hope they don’t, you know.”

Optimistic or not, fans are excited about the series. Since the Braves will have home-field advantage in games three, four, and five, many fans at Chamblee are looking to get in on the action in Cobb County.

“My brothers are coming into town and we’re gonna go to The Battery Saturday if we can’t get tickets, and then Sunday we’ll probably end up going if they go to a game five,” said King.

Other students prefer to watch the games from a familiar couch.

“I’m gonna go to my uncle’s, and we’re gonna spend most of our time watching the games,” said Erick Jacquez (‘25).

Regardless of their preferred setting, however, all Braves fans have one thing in common: their attention will be focused on the World Series this weekend.