Stay Calm and Meditate On 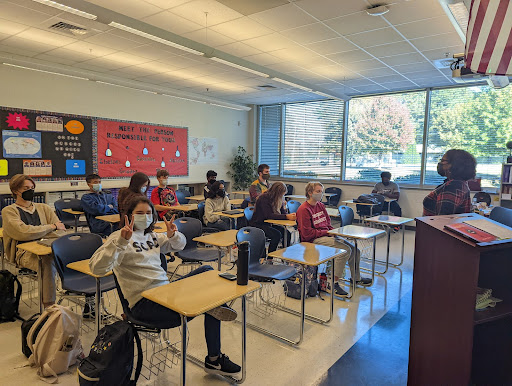 Photo courtesy of the Blue & Gold

Kimberly Nesbitt, a language arts teacher at Chamblee High, has implemented a new meditation strategy to keep her students on track during class. When she learned of this method, she thought it would be a good tool to use with her classes.

“It was one of my objectives for my social emotional learning piece. We set goals every year as teachers, and this is one of my goals to do for this year,” said Nesbitt.

Starting the minute for meditating was an important step to take this year because of the virtual and chaotic classes many students experienced in the past.

“I decided this school year, because of everything we went through last school year, that at the beginning of each one of my classes we were going to take 60 seconds just to clear our brains. We would focus on what we have to do for that class period to get rid of all outside distractions and to really focus and meditate on what we plan to accomplish for that time period,” said Nesbitt.

Not only do the students get a brain break, but it also gives Nesbitt a chance to take a pause too.

“I also get to have a breather because I have seniors and sophomores, so sometimes in a world where everything can happen so quickly, it’s nice to have a break,” said Nesbitt.

The meditation is a simple and easy breathing technique, which makes it possible for anyone to do it.

Some students are new to this technique, but a few are familiar with it. This meditation process has numerous applications such as inducing stress relief or helping with sleep problems.

“Her meditation things are a very good idea and that four, seven, eight breathing techniques is something I’ve done before for going to sleep and that kind of thing,” said Luca Antinozzi (‘22)

While Nesbitt enjoys it, her students have a variety of opinions on it. Most students enjoy having a lull in between classes.

“I think it’s a very good idea. At first, I thought it was kind of weird and it’s not the kind of thing you would expect to do as a senior, but it’s actually been really nice to take a beat. It’s been good because we do a lot of writing and more relaxed work, and we’re not super wound up in that class, ” said Antinozzi.

Depending on what time you have Mrs. Nesbitt’s class, the meditation can increase the benefits.

“I love it. I have her as my first period, so it’s a really good start [to my day]. I’m usually late to school. So I’ll be running to school and I’ll be really frantic since I got ready really fast in the morning. Then I just get to think for a minute meditation,” said Sarah Doung (‘22).

Other students don’t need it every day but think that it’s the most helpful before big events or stressful assignments.

“Sometimes it helps more than other times. Sometimes I’m stressed going into that class or we’re doing a presentation and then it definitely helps,” said Carly Aitken (‘22).