Seasonal Depression Out Of Isolation 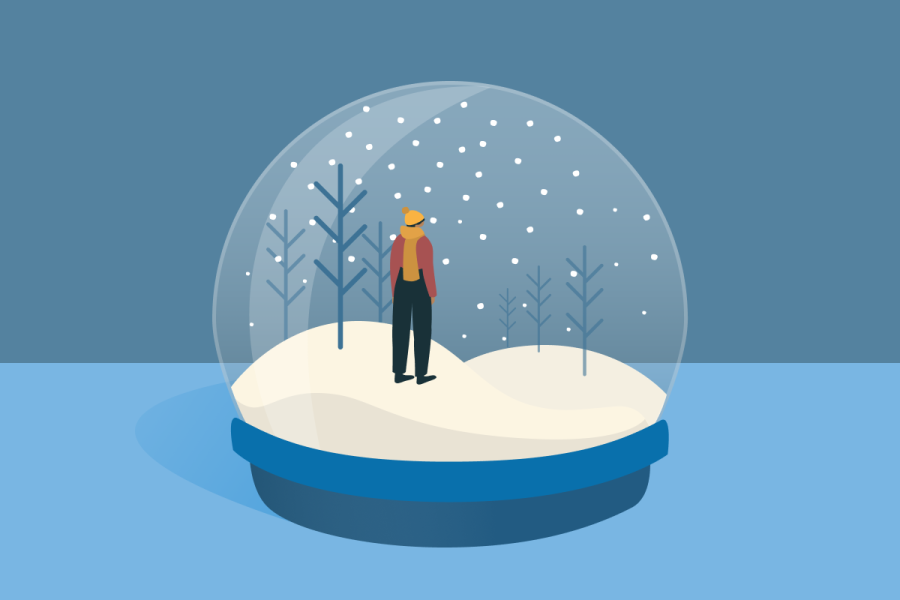 During this time, seasonal depression is linked to a biochemical imbalance in the brain that occurs because of less sunlight. Five percent of adults in the United States experience it, and it usually lasts for around 40% of the year. It is tied to the normalcy of people’s circadian rhythm as well.

At Chamblee, many students are feeling the effects of seasonal depression. They define it in a similar way.

“[It is] weather, climate, or any other periodical time changes that affect a person’s mood in a way that they can’t control,” said Kieran Mayer (‘22).

However, seasonal depression can also occur in the summer, and this is also important to be aware of.

“For me, it’s the fact that during the summer months, I frequently find myself to be just less emotional, less expressive, more sad, and less in touch with myself,” said Willow Kleinfelter (‘22).

It isn’t always weather-related, either; it can be a seasonal difference like a routine change that happens every year at a particular time.

“[I feel it] when I get to the end of the school year,” said Ryann Calloway (‘23). “You’re chugging along, you’re almost at Christmas, you’re almost at the holidays, and you’re just getting in a funk with your mental health and your mood.”
How Seasonal Depression Affects People & the Difference from Normal Depression
The symptoms of seasonal depression are similar to those of normal depression, but they can be different for everyone.

“I get really disinterested in things when [my seasonal depression] comes around,” said Calloway. “I love certain kinds of video games, but lately, I’ve just found it so [tedious], just to even want to play anything. With sports, it’s sometimes a strain to go to practice, even though it’s my favorite thing to do. It just overall affects my mood, how I want to do things, and my motivation.”

Additionally, the disorder can bring about a state of mind that is usually present with depression but more distressing with seasonal depression since it does not go away just for the “season.”

“The degree of happiness that I feel when I’m happy is substantially less [when I’m depressed],” said Kleinfelter. “My emotions never get ‘the best of me.’ They never take charge. They never run in front. It’s like I exist constantly in the state of ‘I’m not letting my emotions be in control and I’m being logical and I’m being focused. But it means that even during times where things should be emotional, I remain in that state, which is really tiring and monotonous over a long period of time.”

Some people notice the contrast in emotions with seasonal depression in comparison to their everyday depression.

“I have diagnosed normal depression and seasonal depression […] so there is always that feeling. But I think I can tell the seasonal depression more because it’s just the colder air or the gloomier weather,” said Mayer. “Even when it was August and there was the occasional once-a-month day it would rain, my skin would just feel uncomfortable. And when I step outside the house, if I’m not bundled up, I get uncomfortable and I just immediately start feeling tired. I think that’s the biggest notice.”

Once a person knows they have seasonal depression, they can know when it will affect them.

“I know it’s coming with seasonal depression. I know I’m gonna start not giving too much effort. I can prepare myself. I’m never prepared, though,” said Calloway.

“You can tell one of the aspects of why or what is causing your mood to feel the way it is [as opposed to] normal depression, [where] there’s not always a cause,” said Mayer. “You can have stressors, but that doesn’t always help understand why you feel down versus when it’s seasonal depression. If you have clear mood changes during a specific season—and that’s not always winter—then that’s an immediate aspect [that helps] you understand why your mood is different for a period of time. This lets me emotionally prepare for what I know is going to happen.”

Many people do not always realize seasonal depression is affecting them until after the season has ended. For Kleinfelter, the realization comes when it turns to fall.

“The time that I most consciously notice it is the first time that a fall breeze rolls in,” said Kleinfelter. “It smells different and that’s what pulls me out of it. And I notice, ‘Oh, wow, my mental health is a lot better now. It’s weird that I sort of got into that muck of it.'”
Effects of COVID-19 on Seasonal Depression
Seasonal depression has especially taken a toll on several people in the past two years with the COVID-19 pandemic.

“Seasonal depression has really hit me like a bomb, especially last year,” said Calloway. “I’ve lost a lot of people because of COVID and school was just disastrous. And then this year, it’s really hard because of assimilating back into the school culture, and then it’s [my] junior year, so it’s incredibly hard.”

For Mayer, the last two years’ seasonal depression has been better, but for different reasons.

“Last year, I don’t think I experienced it significantly worse, because I didn’t leave my house as much, so the biggest thing I had to do was have a heater,” said Mayer. “And then I was still not fine because it was COVID and no one was fine during COVID. I don’t think it’s been as bad this year because my mental health overall has been better, but I have noticed as it’s gotten colder, I’m getting much more tired.”

With the return of in-person classes, the effects of seasonal depression have improved, and that has been beneficial for a lot of people.

“I think it was harder for me when I was alone […] I do my best when I’m with people,” said Calloway. “In some ways, it was easier to deal with it alone because I didn’t feel like I had to live up to an expectation in front of my friends. But now I have my friends if I ever need support. So I suppose it’s like, there’s pros and cons to both, but personally, I like it back in person.”

Increased human interaction has also helped those with seasonal depression.

“I think it’s the overall thing with mental health where having other people around helps,” said Mayer. “Last year, virtual learning was very bad for me, and being in-person again, I think that is helping.”
How to Handle Seasonal Depression
There are ways to help subside the symptoms of seasonal depression, including receiving professional help. A type of treatment unique to seasonal depression is light therapy. In this treatment method, people use a bright light designed for light therapy, usually earlier in the day, to ease their mood for the whole day.

Mayer, whose issue does lie with the cold and dark that comes with winter, tries to avoid the cold and the bad feelings that come with it.

“I think it’s something that you can try and work to counteract [by] staying inside and doing warmer things,” said Mayer. “Some people know me for always wearing layers and always being cold. It’s a mental health thing.”

If the weather is not the problem, other things can be done to bring up one’s mood.

“Outside is a nice quiet happy place for me,” said Calloway. “I love walking and being with my family and my pets. [Going outside with pets] sort of forces me to take a moment to calm down.”

Understanding that the feelings associated with seasonal depression will pass with time has helped many get through such an emotional time.

“I have a very strong conviction that my mental health will slowly get better over time […] and so when I am at my worst, I feel very confident that in many years time, I will feel better,” said Kleinfelter. “One of the few things I was living for was the fact that it’s not going to always be like this. I remember that it was better and it will get better again. It was the times that I got into discussions with people, into lengthy jokes with people, that were the few times that I really did get to feel things and that I felt better.”

As a last note, it is important to be aware of seasonal depression and understand that it is not the fault of the person feeling it — just something they must cope with.

“I think having a term and an explanation to put to [seasonal depression] is a very helpful thing. Not just for me, but for other people because holidays are supposed to be a joyous thing [though] some people can’t always be super happy during the holidays and that’s not their fault. More acceptance that this is an [issue] for some people [would be better],” said Mayer.

[Editor’s Note: More information on Seasonal Depression/ Seasonal Affective Disorder can be found at the resources linked below. Always seek help from your doctor or other qualified health professional with any questions you may have regarding your physical and mental health.]