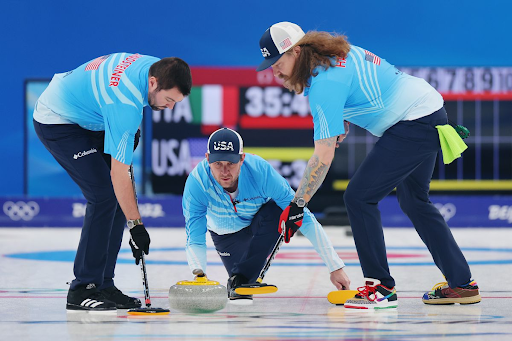 Curling is a silly fake sport, and I wish it would do everyone a favor and just cease to exist. The athletes are all paid actors, and it’s all a front for a multi-generational money laundering scheme.

Curling is the only sport where Olympic-level athletes can be out of shape. It’s essentially shuffleboard for people who prefer the cold and haven’t developed arthritis in their knees yet. They have a little tap dance metal plate on the bottom of one of their shoes so they can get down on one knee and slide a rock towards a bullseye and there’s skill involved somewhere, or so I’ve been told.

What even is curling? Is that the thing people do with weights where they lift them slowly and make sensual and direct eye contact with themselves in the gym mirror? I have wasted numerous hours of my life watching this useless sport and I’m almost just as confused as you are, but I think I finally have a grasp of the basic rules, which once you hear them will actually make you hate the sport more somehow.

The game begins with a cordial coin toss to determine which team of four members will begin the fun. The goal of the game is to make sure your “stones” end up in the center of “the house” by gliding them down a 150 foot sheet of ice.

According to legend, we have 16th century Scotland to thank for this horrendous monstrosity. Side note: did you know the original Royal Caledonian Curling Club in Scotland is referred to as “the mother club?” Not really pertinent information, but repulsive nonetheless.

After they shake hands or whatever, the Skip (the team captain) throws the first stone from the hack (a foothold they push off of to throw the stones) to the house (the bullseye at the opposite end). The stones must be thrown past the hog line (yes, that’s actually the name) in order for them to be counted. After the stone is thrown, the skip mean spiritedly yells at their teammates to sweep the sheet right in front of the stones with brooms to create friction and minutely melt the ice so their stone can go further.

Apparently, the way the thrower angles their throw does something, but I’ve yet to see it matter much. And the way they throw the stones is ridiculous. The only way to describe it is an oddly stagnant lunge. Even after all of my exposure to the odd position, I can’t help but chuckle every time I watch someone do it with a straight face. After the skip throws their first stone, the next team’s skip gives it a go. After both skips throw their second stones, the seconds throw the third and fourth stones, the thirds throw the fifth and sixth stones, and the fourths throw the seventh and eighth stones.

They’re not just throwing them all willy nilly; different throws have different names. A Guard is thrown between the hog line and the house to block the opponent’s throws. A Draw is thrown with the intent of scoring (getting your stone closest to the button (the middle of the house)). A Take-out, you can probably guess what this one is, is used to take out opponents’ stones on the house.

Second in line for the silliest aspect of curling is the vigorous sweeping performed by the non-throwing teammates once the stone is released. This entails real people handling tiny brooms, as they feebly attempt to warm the ice up a little to either make the stone move further or make the stone move at a straighter trajectory. Apparently, this can increase the distance of the stone by up to two to three feet.

As these people with presumably zero dignity left desperately sweep the sheet, the skip yells at them phrases such as “Hurry! Hard!”, “Hard!”, or my personal favorite “really gotta go on this one boys” to inform the sweepers when and how hard to sweep. After the second to last stone is thrown it’s time for the hammer, which is determined by LSD.

LSD, or Last Stone Draw as the losers of the curling community refer to it, is performed at the beginning of the game to decide who gets to throw the hammer (the last stone) at the end of the end (the end of each team’s eight throws). Each team throws a stone and tries to get it as close to the house as they can, and whoever is closer is awarded the hammer. Having the hammer is important because it can be the deciding point that wins the end. Once a team wins an end though, the ability to throw the hammer is transferred to the other team.

That brings us to scoring. Whoever has the closest stone to the button wins the round, and if they have more than one stone closest, those points get added as well. If no team’s stones are touching the house, it is called a blank end, and no points are added and the entire end is useless unless you’re the team with the hammer, in which case you are allowed to keep your hammer advantage.

This entire event is then repeated for nine more ends and if that sounds like it would take a while that’s because it does. The average curling match lasts for about three hours, and the players are only allotted 38 minutes of thinking time, so it’s mostly invigorating gameplay. Did you get all that?

How anyone could enjoy such a dull and repetitive “sport” is completely incomprehensible to me. That being said, if you curl I sincerely apologize for my hurtful mockery of your livelihood and passion, but let’s be honest, you probably deserve it.