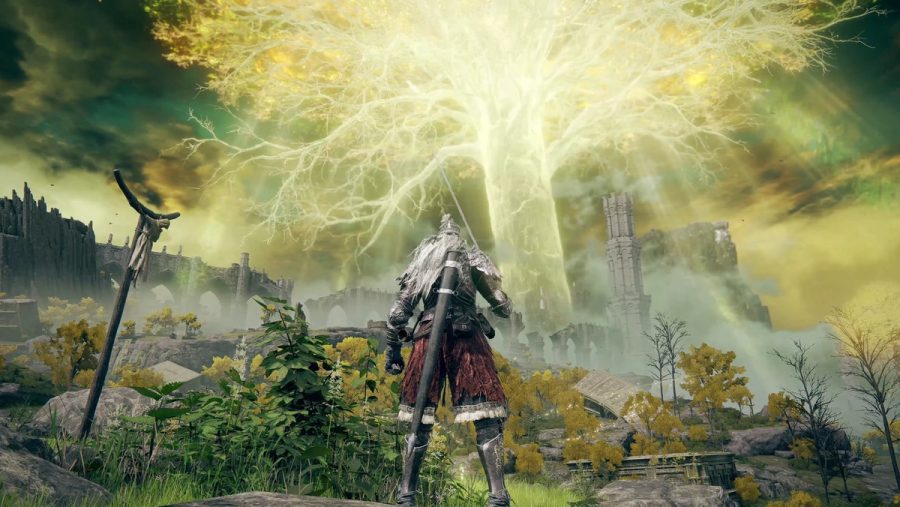 A still from the video game "Elden Ring."

From the brilliant minds of Japan’s famous game developer Hidetaka Miyazaki and modern fantasy icon George R. R. Martin comes “Elden Ring.” Published by video game company BANDAI NAMCO and developed by FromSoftware Inc, “Elden Ring ” is the newest and one of the most anticipated video games of the year (past four years at that).

Deeming the “souls-like” genre of challenging level-based RPG combat games, Darksouls has come down in video gaming history and to some, infamy. With its ambitiously difficult levels and intricate combat, some are turned away, but the brave millions of Darksouls players are drawn to the challenge. Changing up the precedent, “Elden Ring ” is an open-world game, different from previous FromSoft games which are all level orientated. It is incredibly difficult and incredible visually.

On your ethereal mount, Torrent, a sort of cross between a horse and ram, your character is free to explore “The Lands Between,” searching for bosses and dungeons alike to conquer. In the center of the map stands the great and luminescent Eerdtree, a giant glowing tree that illuminates the map. While the basic plot is sparse, as is with Souls games, the lore is as deep-rooted as the Eerdtree itself. Fighting bosses on foot and Torrent alike, “Elden Ring” is the biggest and most contemporary take on the open-world genre. With dozens of flawless scores, “Elden Ring” is on the board for the best video game of the year.

Most popular and modern open-world games fall into the boring trap of filling the map with pointless points of interest and items to collect. Sometimes all of the question marks and side quests posted on a map take away from a true open-world experience. As a point of interest appears, it draws in the player’s attention, negating the free will of the player.

In “Elden Ring,” the only marks on the map are your own. Despite the expansive map and side quests, all are left to the player to come across them randomly. This adds so much more realism and challenge to the game, really pushing gamer-to-game interaction. It has made me start my own “Elden Ring” journal as I track bosses, dungeons, and NPC quests while I explore, which adds a personal interactive layer that most games don’t have. I truly feel as though I am a lonely adventurer discovering the story location by location.

Debates over whether “Elden Ring ” is the most accessible FromSoft game to new players have sparked amongst the gaming community. With the “Dark Souls” series usually being an incredibly niche small group of gamers, “Elden Ring” has brought in millions of new fans and some soon-to-be enemies. “Dark Souls 3” sold 10 million copies worldwide while Elden Ring has already sold 10 million copies a mere two weeks after launch.

And that’s just on PC, not accounting for the other tens of millions of console players. Being known for its difficulty, FromSoft games are not for the “soft” willed, unlike the companies’ namesake. Without any difficulty modes, the sole purpose of Souls games is overcoming the difficulty for a satisfying victory.