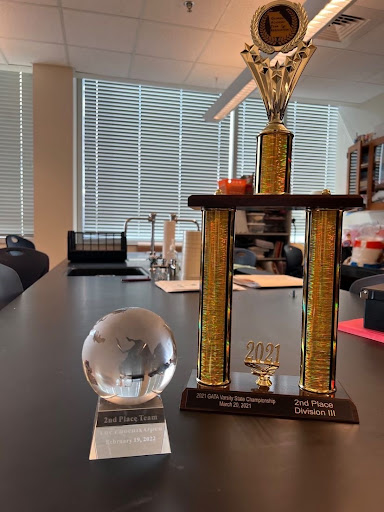 For the fifth year in a row, Chamblee High School’s quiz team made nationals, which will be held at the Atlanta Marriott Marquis and Hilton Atlanta from May 27 to May 29.

“There are multiple tournaments that can get you to nationals, they are called National Academic Quiz Tournaments; if you place well in those tournaments you can qualify for nationals,” said Srivatsa. “Earlier in the year, our team placed first in one of those tournaments, so that allowed us to qualify.”

Qualifying for nationals also exposes the competitors to a more challenging level of questions.

“Since we made nationals most years in the past, we weren’t too shocked that we made it this year,” said Seegars. “The questions at nationals are usually really difficult, pretty much approaching college level and the reader is a lot faster as well.”

Anand, this year’s quiz team captain, is an advocate for making sure his team knows this is both an individual and team sport by holding group sessions.

“We make nationals most years; as the captain, I was just trying to help the team, like improve on everyone’s skills and lead them on the right track. I like to organize study sessions with everyone, where we all read questions together and go over the topics together,” said Anand. “So when it finally came time to qualify for nationals, the routine sort of felt normal because we’ve done it before.”

Before qualifying for nationals even morphed into an idea, many of these students joined the team simply because they had a knack for memorization and trivia.

“It seemed like a popular club in elementary school, and I figured that I enjoy memorizing facts and retaining information, so I decided to try it out,” said Srivatsa. “I studied by reading books, watching the news, paying attention, and absorbing information.”

In addition to the importance of performing well as a team, individual scoring plays an important role in personal success.

“Our team came second in a tournament but I ended up first overall in the individual scoring, and it just made me realize how much I’ve grown as a player,” said Anand. “Helping my team at that tournament really helped to boost my confidence, which is something I want to continue doing.”

Science teacher Mary Wagner has been the team’s faculty advisor since fall 2019, volunteering because of a rather unusual circumstance.

“They were looking for a faculty sponsor and there was an opportunity to go on to the High Q quiz show, which CBS does,” said Wagner. “They told us they didn’t have a sponsor, so I told Ms. Barnes that I would do it.”

After CBS’s High Q quiz show, Wagner was given the title of the team’s official coach and sponsor.

“I supervise their training and practices, I sign them up for whatever tournaments they want to play in, and then I go to the tournaments and I coach them,” said Wagner. “Most of the coaching I do is just telling them to stop buzzing in so quickly or to buzz in faster.”

Despite “Jeopardy” being one of the most iconic quiz shows, Wagner doesn’t believe that the show is a useful resource for Chamblee’s team.

“I don’t think that watching ‘Jeopardy’ prepares you well for [quiz bowls], I feel like the quiz bowl questions are much harder,” said Wagner.

Although the great feat of qualifying for nationals isn’t new for the team, its members are still proud and excited to compete once again.