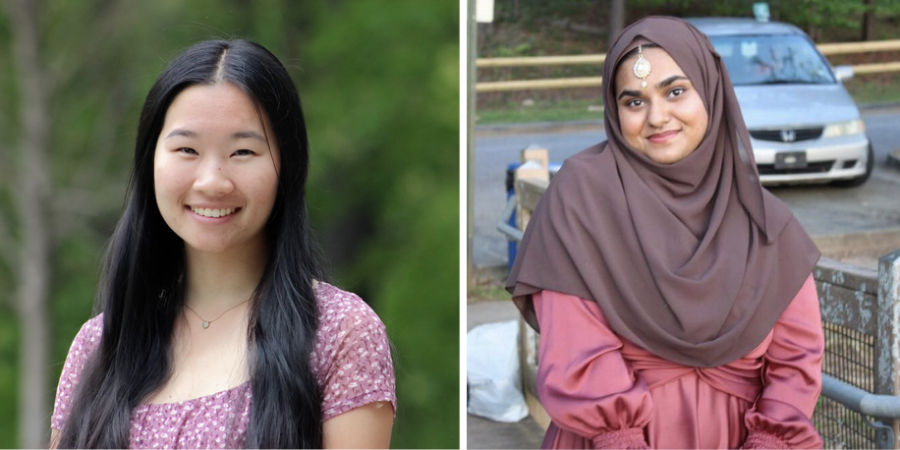 “It’s really important to have good relationships with people,” said Magnet Valedictorian Olivia Li. “It doesn’t need to be a ton, but it’s important to have people around you that support you through whatever comes your way.”

At the beginning of April, every DeKalb high school valedictorian and salutatorian was announced. This year, Chamblee’s Magnet Val is Olivia Li and Resident Val is Rafia Islam.

“It’s very scary to be Valedictorian. I mean, there’s a lot of responsibilities that come with it,” said Li.

Li did not make it a goal to become Valedictorian, but she understands how it happened.

“I didn’t really expect it, but looking back I know that I’ve taken a lot of challenging classes so that would raise my GPA,” said Li.

Magnet Valedictorian is selected based on the student in the magnet class of 2022 with the highest GPA.

In order to have a GPA that high, sacrifices undoubtedly have to be made.

“I think I had to sacrifice some fun and social things, but I also feel like I incorporate having fun and spending time with friends into studying and doing my work,” said Li.

Motivation is a key factor in keeping good grades, and Li had a specific mindset that helped keep her motivated.

“I try to keep myself motivated by seeing the value in things which can be tricky for some subjects like calculus,” said Li. “You do need to know calculus to know how to engineer things. In biology, we learned about vaccines, and even though I don’t want to be a scientist, what we’re learning could be helping someone else who does want to be a scientist.”

Li described her senior year homecoming week as a highlight of high school.

Next year, Li plans to move across the continent, beginning an exciting adventure.

“In college, I’m most looking forward to exploring Vancouver and Canada and meeting new people!” she wrote.

She was accepted into the University of British Columbia and will be over 2,700 miles from the halls of Chamblee.

“I plan on going to the University of British Columbia in Vancouver, Canada,” said Li. “I’m going to study for a Bachelor of Commerce, which is kind of like business, and I don’t have a decided specification within that program right now.”

Resident Valedictorian Rafia Islam has also worked long and hard for the past four years, and it has undoubtedly paid off for her as well. Chamblee is unique in the aspect that it gets to honor two students with valedictorian.

“It feels great to be a Valedictorian. I feel really accomplished. I found out when one of my friends saw a post from the DeKalb Instagram and she texted me about it. It was really exciting,” said Islam.

Islam’s goal in high school has always just been to work hard.

“I just made it a goal to do the best that I could and I wasn’t expecting the title, I was just doing what I could do to be a successful student,” said Islam.

She also feels that this success came with some opportunity costs.

“I definitely sacrificed some nights of sleep and I wasn’t able to keep a good balance between academic and social life. I definitely had to skip going out with my friends some nights,” said Islam.

Productive studying was a key factor in keeping her grades as high as they were.

“Don’t cram, ever. I would never recommend that to anybody. The information doesn’t stick in your brain. If you have a test or quiz coming up, start studying about a week before and study a little bit at a time. That’s my biggest bit of advice,” said Islam.

Although stress is a natural part of high school, stressing too much is one of Islam’s biggest regrets from her high school experience.

“I wish I hadn’t stressed so much. I definitely shouldn’t have taken school as seriously as I did. Obviously, it’s still important to take school seriously but I put too much priority on my grades and studying instead of my mental health,” said Islam.

Luckily, she got to enjoy many moments as well.

“I’d say my favorite memory was messing around with my friends at times we were supposed to be doing work,” she said.

When originally interviewed, Islam did not yet know where she would be going to college but expressed an interest in studying Finance.

“I ended up committing to Georgia Tech and I’m really looking forward to exploring adulthood and figuring out things on my own,” she said later.