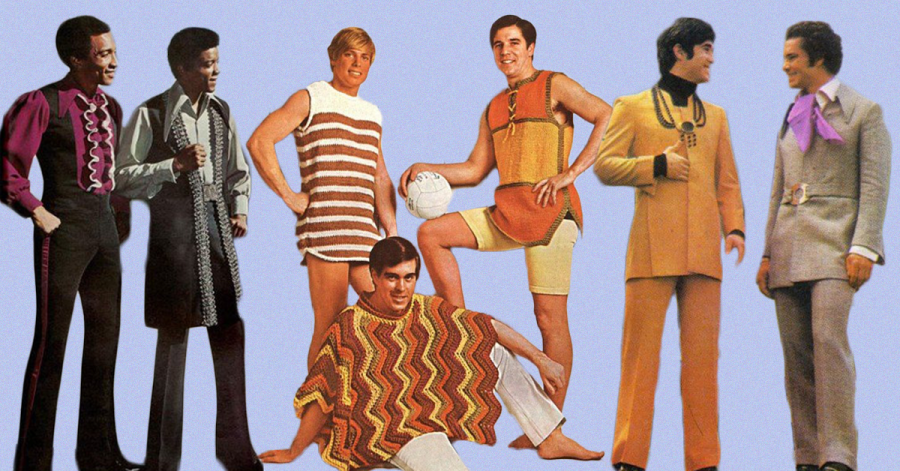 For months I have been pondering what I believe to be the best decade for men’s fashion, and I can now confidently proclaim that it was the 1970s. After rewatching the film “Fantastic Mr. Fox” the other night for the over 100th time, it hit me like a well-tailored corduroy suit thrown at my face. Although, before I begin, I must admit my opinions on the decade might be tainted by my unbridled admiration for a film that has held the number one spot on my list of comfort movies since I was five. But I’m willing to overlook that if you are.

When you picture the 1970s, the first thing that probably comes to mind is a hippy, and although that is correct in theory, there’s a little more to it. To understand how menswear transformed from stiff and drab to colorful and adventurous, we must go back in time a decade and discuss the Peacock Revolution of the 1960s. The beginning of the Peacock Revolution, dating back to 1964, is often credited to the Beatles and their introduction of mod fashion from the famous Carnaby Street in London to American teenagers. This style of bright almost garish colors and paisleys, heeled shoes, slim-fit trousers, skinny ties, frills and lace, and accessories like necklaces blurred the lines of gender and set the stage for the fashions commonly associated with the 70s.

The Peacock Revolution continued into the early 1970s with the rise in popularity of bell bottoms, colorful suits made of velvet, and exaggerated lapels. Designers like Yves Saint Laurent were playing with the boundaries of feminine and masculine, which led to a greater acceptance of gender-neutral clothing. This idea of non-gendered clothing is one of my favorite ideologies of the time period, and it’s extremely cool to see that idea becoming popular again.

This gender-neutral trend was pushed even further with the fashions of casual clothing in the mid-1970s. Most everyday items were worn by everyone including bell bottom jeans, t-shirts, mood rings, vests, and sweaters, but men were more likely to be seen sporting oxfords and chinos. Textures like corduroy became a staple. Long hair for men was also gaining in popularity.

Glam rock evolved and was popularized by stars like David Bowie and Freddie Mercury who adorned satin shirts, silk ascots, spandex jumpsuits, glitter, and makeup. It was a style full of whimsy and androgynous flair. They encompassed a style that was in direct opposition to the macho men of the rest of history. They wore skirts, feather boas, incredible costumes, and whatever they felt like because nothing was too much.

In the later 1970s athletic wear took off and men could be found in tracksuits and jumpsuits. They would tuck in their shirts and occasionally pop their collars. They wore tennis shoes and headbands. The shorts became short and the work out videos became prevalent.

Another popular style was disco, which was basically a combination of the cheap synthetic materials of the athletic style and the wild sparkly nature of glam rock. Aviator sunglasses and three-piece suits were all the rage. Originally started in gay nightclubs in New York, the style quickly permeated throughout the public and hits like “Turn the Beat Around“ and Saturday Night Fever were all the rage.

Although men’s fashion is interesting, younger men at the time were absolutely killing it. Hippy fashion, mostly comprised of the middle-class youth included tie-dye, embroidered bell bottoms, and long hair. Most historians view its creation as a revolt against the Vietnam War. Teddy Boys, originally from the 1950s, were rock and R&B lovers who wore vibrant colored suits, animal skin waistcoats, and hairsprayed hair. Heavy metal teens fit in more with the hippies of the time instead of the biker outlaws of the 1980s. They wore t-shirts, flared pants, and earth tones and were probably listening to Led Zeppelin.

Punks are by far my favorite subculture. To quote Elizabeth Wilson from the Rutgers University Press, “Punk was trash culture gone avant-garde and/or the avant-garde gone trash, and just as Dada had tried to destroy the institution of art, so the punks seemed bent on destroying the very institution of fashion.” You can’t talk about punk fashion without mentioning Vivienne Westwood. When people think about Vivienne Westwood nowadays, they mostly think of her broaches or that one necklace that everyone bought last year. I want you to take that and completely throw it out the window because her 1970s work was a shredded, tartan, anti-establishment, cool as hell amalgamation stemming from the rebellious youth as they tried to distance themselves from the outdated and oppressive fashions of their parents. Her clothes were deconstructed, unfinished, inside out, slashed through, safety-pinned together and all totally punk rock. Bands like the New York Dolls and The Sex Pistols helped popularize the style. Punks could be found wearing leather jackets, Doc Martens, and anti-establishment slogans on their shirts. Many of them opted to make their own clothes as well.

There was a lot of pain and political turmoil in the 1970s and the fashion at the time was a direct reflection of that. Some chose to embrace a bright and whimsical style and some chose to embrace a rebellious and counter culture style. No matter how people decided to dress, every subculture and aesthetic of the 1970s was absolutely iconic.