The Best A24 Horror Flick Since Midsommar: “X” 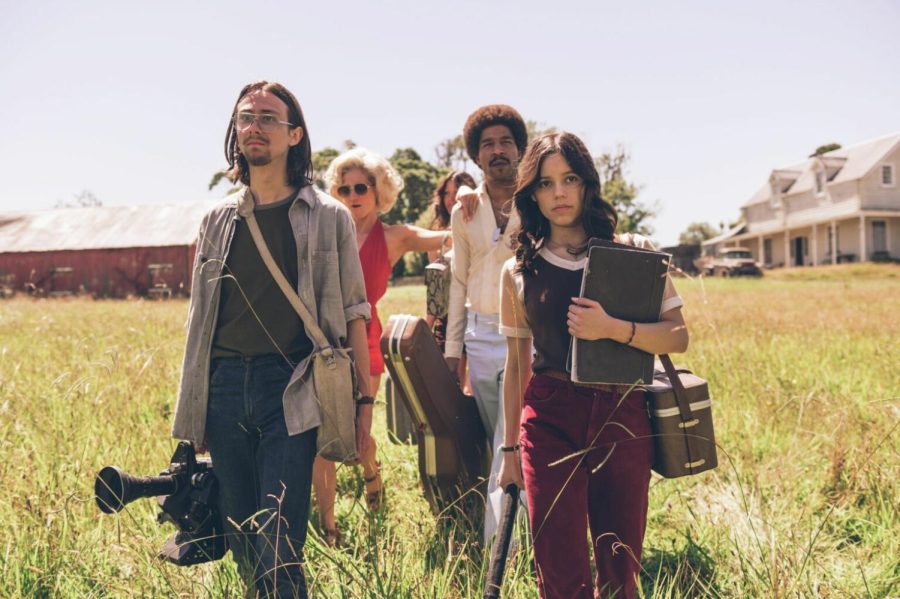 Photo courtesy of A24

Grindhouse horror films have some of the most, gruesome, gritty, and oddest, most uncomfortable movies out there. Since the genre-defying “Texas Chainsaw Massacre ” came out in 1974, the “Grindhouse” genre was defined as a plot that follows a group of younger adults going off on a trip to film or explore the usual desert-like, rural setting. The movie ends up in bloody chaos as the protagonists come across some sort of uncanny, mysterious foe that rips them apart, one by one for an equally disturbing reason. While keeping the classic plot points of a grindhouse film, and numerous direct references to Texas Chainsaw, A24 brings more purpose and relativity to the genre with their newest horror flick, simply titled, “X”.

In the case of “X”, the cast’s purpose is to film a new “groundbreaking” adult film with hopes of it bringing them to stardom, set in Texas during the 1970s, prime time for the adult film industry in America. With their new filmer and director, RJ (Owen Campbell), and determined aspiring actress, Maxine Minx (Mia Goth), there is hope for the cast’s success. It is planned to be filmed in a cabin in rural Texas that greasy Wayne Gilroy (Martin Henderson) has found and rented for a night or two. Along with the sensual Bobby-Lynne (Brittany Snow), macho Jackson Hole (Kid Cudi), and the curious Lorraine (Jenna Ortega), they all set out in Wayne’s van.

A pit stop at an ancient gas station in rural Texas tells the audience and cast that this is no progressive part of town. The store clerk lazily listens to a passionate pastor on the TV, preaching of devils and sin that have corrupted the youth. We then learn more about Maxine’s determination to become a star, looking to outshine her elusive cast member, Bobby-Lynne. The ring of crickets and fluorescent lights sets a thick sense of tense stillness as we watch different members of the cast bashfully interact in the conservative town. After RJ shows off his directing skills at the gas pump with Jackson, they make their way to their final destination.

Our first introduction to them is a stark characterization of the antagonists of the movie. A farm run by an elderly couple, Howard and Pearl, means no warm welcome to the new renters. Howard, a fossil of a man, meets Wayne at the door with a shotgun, arguing that Wayne has trespassed on his land. Wayne tries to reason with the curmudgeon as he gestures to Maxine to grab the gun in the van’s glove box. Luckily, Howard realizes that he rented the cabin on his farm out to Wayne, but unknowingly to a bunch of youth. With the first scare of the movie, the cast makes their way to the cabin, but not without Maxine meeting the eyes of the watchful Pearl (Howard’s wife) creepily lurking through an upstairs window.

With the scene set and full of tension, chaos slowly ensues. RJ and the cast film part of the film as Maxine has a close encounter with an alligator in the lake behind the property. Running into Pearl, Maxine is invited into the house for the most suspenseful glass of lemonade with the TV playing the same program with the pastor from the gas station. The stillness of the south plays in the background as parallels between scenes being shot in the cabin and the house are used to show an uneasiness in tone. There is something up with Pearl as she has an odd obsession with Maxine and her youthful beauty, introducing the main theme of the movie: the craving for raw, young love; from both parties. Maxine awkwardly sees herself out as she picks up on the uneasiness of Pearl and returns to the cabin.

After a distressing scene where Pearl unsuccessfully implores her husband to make love with her, it switches back to the original cast. This is where “X” really starts to set itself apart from other slashers, in true A24 fashion. A classic dissection of film and genre, director Ti West explores themes of the inherent erotic femininity and voyeuristic tendencies of adult films in a film of his own. Goth plays the part of both Maxine and Pearl, highlighting the duality of their characters as direct foils. As Maxine shares a liberating speech about sexuality and the power of expressing it as a woman in film, Pearl cowers as she wrestles with her long-gone beauty and youth. She finds herself angered by the blatant expression of it from Maxine and the other youthful characters.

Once she finds out what the rowdy renters are up to, things start to get messy. Each member of the cast is gruesomely picked off by Pearl and her husband. There are some jarring scenes in the basement and a bedroom, along with a hint or two that this is not the first time this has happened at casa de Pearl.

In Texas Chainsaw fashion, we are left with the “final girl” who escapes the scene. The scream queen of this movie is none other than Maxine who makes a hasty and violent escape. This is definitely in my top three favorite modern horror movies, matching up with “Midsommar” and “Hereditary,” for me. The grittiness and disturbing plot was perfectly executed for this impactful and relevant mock grindhouse film.