The Curious Case of Democratic Donations To Far-Right GOP Candidates 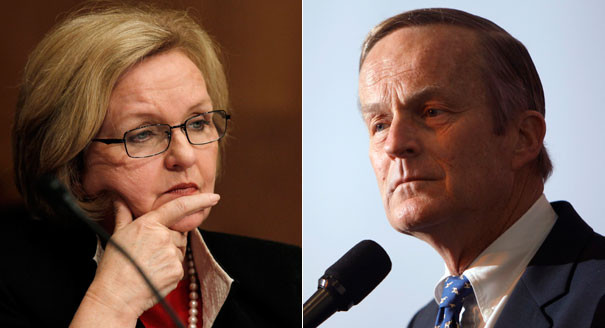 Claire McCaskill and Todd Akin. Photo courtesy of the AP

Politics is a money game. It’s as plain and simple as that. Without hundreds of thousands (or, in most cases, tens of millions) of dollars, it’s impossible to win any political race in America, be it at the state or national level. In Georgia, the incumbent governor, Brian Kemp, raised more than $23 million for his campaign. His 2023 opponent, democrat Stacy Abrams, has also raised more than $20 million since announcing her candidacy. Money is spent on many things, such as campaigning, ads, etc. However, some nationally are getting creative with how this money is spent. In fact, while it may seem counterintuitive, some Democratic candidates are donating to extremist opponents in order to better their own chances.
Claire McCaskill used this tactic to win her bid for Missouri’s senate seat in 2012. McCaskill spent more money on Tea Party candidate Tod Akin than he himself did. In her words, he was the “weirdest” candidate. With the help of McCaskill’s donations, Akin won the nomination. In the general election, he said some “off the wall” things that ended up ostracizing him from his Republican base. McCaskill ended up winning the election. In her mind, she won by taking advantage of the things about Akin that made him popular to republican voters but unpopular with independents.
This tactic continues to be used today. In Illinois, $35 million was spent by Democrats to attack the moderate candidate, helping the far right candidate Darren Bailey. He won the nomination, but his extreme beliefs may hurt his chances in the general election. For example, the staunch 2nd Amendment supporter said that the country should “move forward” shortly after the Highland Park July 4th Shooting. He has also called Chicago, the state’s largest population center, a “hellhole” on multiple occasions. Despite this, it still remains to be seen if Bailey will prevail in November.
In reality, most of these ads are not obviously in support of the far-right republican. Mostly, they attack the more moderate primary candidate while tying the target to Donald Trump. As in Missouri in 2012, the idea is to help the target candidate edge a win in the Republican primary while still encouraging independent and swing voters against them.
This strategy, though subtle in some cases, comes with obvious risks. If Democrats don’t choose their methods and targets effectively, they may find that they are hurting themselves in the end. While there haven’t been any direct examples of this happening, it wouldn’t be unimaginable to watch a Democrat-supported far-right candidate win an election. In Pennsylvania, Republican Doug Mastriano said to send opponent Josh Shapiro “a thank-you card” for his role in the election. Shapiro spent more than three-quarters of a million dollars on ads tying Mastriano to Donald Trump. Now some are saying that Mastriano has a chance of winning it all.
According to McCaskill, the risks have increased in the last decade. In her election, Republicans rejected Akin for his extreme statements. Now, she thinks that it would be hard to “count on Republican leaders to stand up and reject a candidate that said things that were abhorrent to most voters.” In a world where Donald Trump won a national presidential election, it’s hard to say that anyone is too extreme.
Ethically, this method is complicated. Politics is already dominated by “dirty money,” attack ads, and corruption in campaign spending. (Look at Watergate.) Democrats are split on the issue. Many say that supporting those that are dangerous to democracy is dangerous, full stop. Others say that supporting these fringe candidates is legitimizing their extreme platforms. Allowing these far-right candidates to win primaries gives them prominence, standing, and control in the Republican party, allowing them a space to speak on their platforms.
In my opinion, the whole system is generally unethical. While in some cases they are merely subtle alienations of the candidates voter base, it still goes against general principles to support extremist candidates. I think that it definitely makes sense that by assisting these far-right politicians, Democrats may be inadvertently giving them a stronger foundation for their hostile platforms. Even if it does end up getting the “right” candidate in power, isn’t democracy about putting the best people against each other? Frankly, in America it is hard to tell.