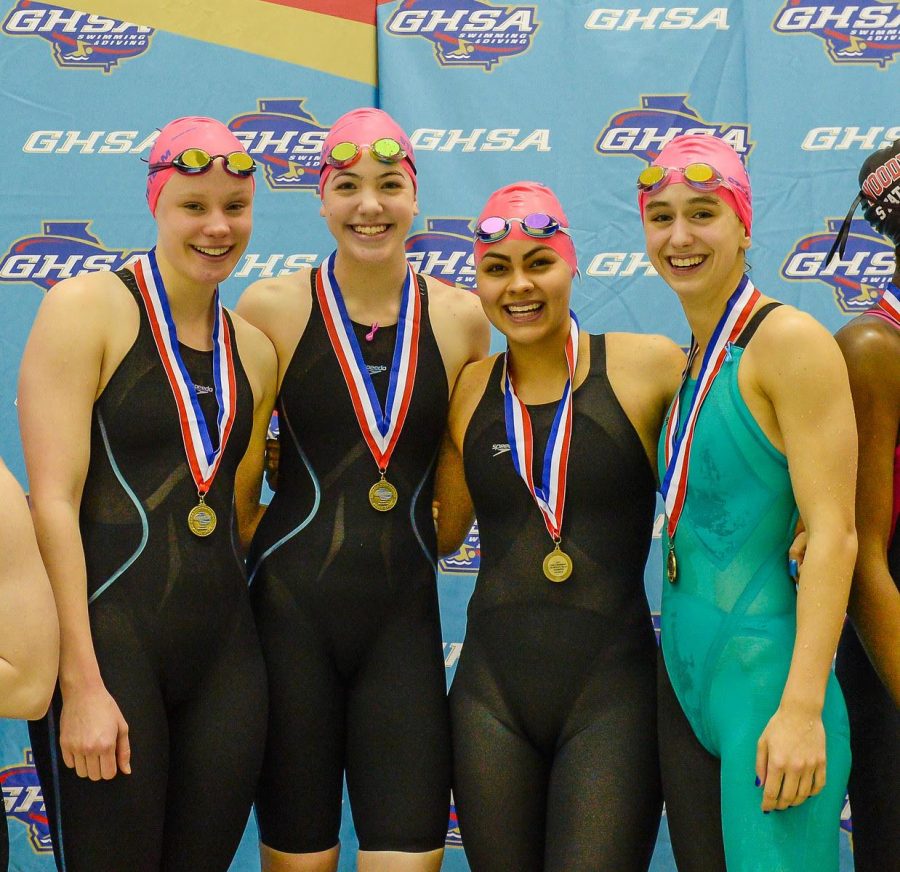 This year, at the Georgia High School Association (GHSA) Swimming and Diving State Championship, which is held at the Georgia Tech Aquatics Center, the Chamblee girls placed second overall in the state of Georgia, losing to Marist by only nine points. The Chamblee boys placed third. Many swimmers from Chamblee placed very well and even won both relay and individual events.

“This is the best finish the program has had in its history,” said swim coach Lorri Reynolds.

The GHSA State Meet lasted two days, with preliminary races taking place on the first night and final races on the second. Other than the longer duration, the state meet was similar to most other high school swim meets in terms of set-up and scoring. However, the level of skill was much higher and the competition was much more intense.

“[The state meet] is much more exciting because you’re watching all of these people who are the best in the state and are all really fast,” said Grant Burke, one of the boys’ captains.

29 swimmers from the Chamblee swim team either met the qualifying times for the state meet or were chosen by the coaches to be an alternate. Not all of these swimmers actually competed. In fact, only four girls swam at the meet: Jade Foelske, Teresa Maloney, Brynn Lautenbacher, and Julia von Biberstein.

Senior Renee Obarowski was one of the swimmers who attended the meet as an alternate.

“I liked being an alternate because I was on the team with all of my friends and I didn’t even have to swim at the meet,” said Obarowski.

“I was just so overjoyed for the four girls who swam their way to state runner up,” said Obarowski. “The bond between them was just so tight, there was no stopping them short of the top.”

Maloney, a sophomore and swimmer for the girls’ team, believes that the four girls who swam for Chamblee at the state meet gave it their all.

“Everyone was on their A-game and gave the performances of their lives,” said Maloney.

The four girls placed first in the final medley relay race, where each swimmer swims one of the four strokes (butterfly, backstroke, breaststroke, freestyle). Chamblee beat all of the other teams in the entire state by almost four seconds, which is extremely impressive considering the intense competition at the meet. Many of the swimmers on the Chamblee team also placed first or second in individual events.

“We are much better athletes than we were last year and I think that is why we were able to place so high and compete so well,” said Lautenbacher.

Reynolds believes that if the girls’ team had a diver, the team would have placed even higher.

“Had we had a good girl diver who qualified for state and had gotten some points for us, that would’ve been the difference between second place and first place,” said Reynolds.

However, placing so high with so few swimmers is no minor feat.

“For the girls to come in second with only four swimmers and no divers is beyond impressive,” said Lautenbacher. “I could not have been more proud after the meet.”

For the seniors on the team, the state meet was the last meet that they will ever swim in. Some of the swimmers were even brought to tears thinking about the fact that this was their last meet.

“Teresa and I sat on the bleachers together and cried when [the meet] was over because it was the beginning of the end of my time at Chamblee,” said Lautenbacher.

Despite the sadness, the seniors were able to end their high school swim careers on a positive note.

“It was a good way to go out,” said Carl Marwitz, one of the boys’ captains.

According the Reynolds and the senior captains, the team has a very promising future and is expected to achieve even more.

“I’ve loved being on this team and while I’m sad to leave, I’m excited to pass the torch to the next captains and see what they can do with the team,” said Lautenbacher.