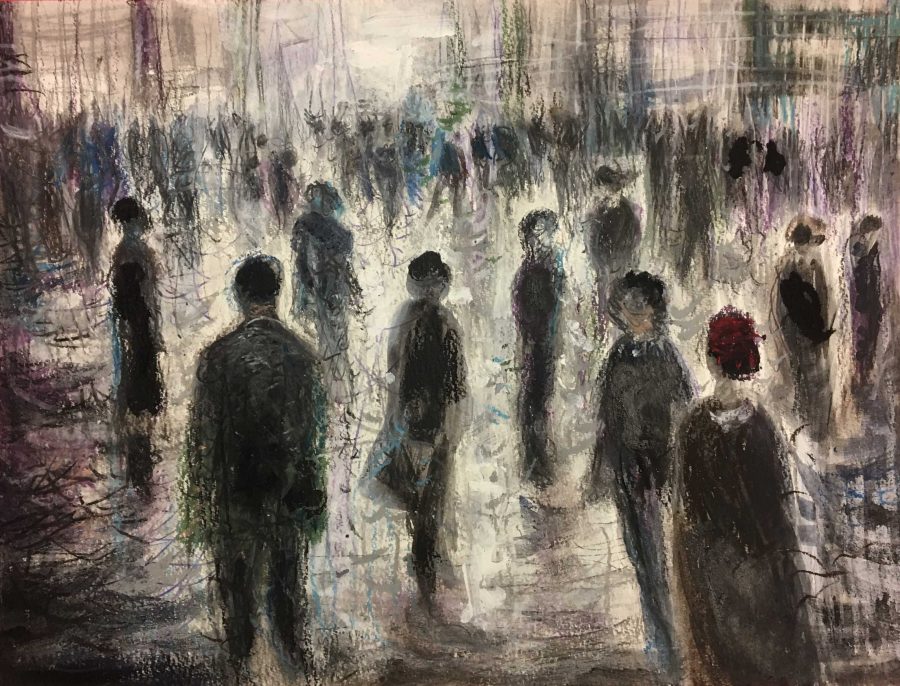 Junior Lina Chitadze had never submitted to an art competition before her art teacher, Lisa Guyton, told her about the Atlanta High School Art Exhibition.

“She basically made me sign up for it, because I didn’t really know about it,” said Chitadze. “She thought I should do it.”

The exhibition is a high school art competition with eight places that received prizes of scholarships and art supplies. Chitadze won fourth-place. The deadline for submissions was February 23, and the winners will exhibit in the Dogwood Festival from April 7 to April 9.

Since there was no set theme or medium, Chitadze had a lot of freedom in her composition.

“It’s basically like a street below these people,” said Chitadze. “It’s like silhouettes of people, and it’s a really dark environment, and it’s supposed to depict loneliness. There’s a lot of people, it’s a crowded area, but it’s lonely anyways.”

Chitadze decided to try a new style for the competition.

“This is kind of my first time doing it,” she said. “I never really did anything like this. I used acrylic and oil pastels. And some colored pencil, too.”

Chitadze has been painting for years.

“Since I was really, really young,” said Chitadze. “But I guess I got into acrylic paintings maybe in middle school.”

She practices various art forms on a regular basis.

“I try to draw as much as I can,” she said. “Sometimes I don’t have time because of schoolwork. I don’t paint as much, I mainly draw more. I’ll create a piece maybe once a week. But I’ll doodle things maybe everyday, throughout the day.”

Although Chitadze usually depicts emotion, she is looking into new subjects to draw and paint.

“I want to work on landscapes, making them more realistic, because that’s pretty hard for me,” said Chitadze. “Also people, I want to do portraits. Like really realistic, even though that seems really hard. I really want to try that. And new mediums, too.”

She feels that her greatest artistic strength is in her choice of color.

“I feel like I choose the right colors for the piece, for the mood that I’m trying to show,” said Chitadze.

However, she struggles with realism.

“I guess most of mine are bad, they don’t look realistic,” she said. “I try to make it look real. I’m really bad at that.”

Guyton thinks her dedication is why she was able to achieve at that level.

“She has a really strong work ethic, and is often working on things on her her own,” said Guyton. “So I actually didn’t see too much of that piece before she brought it in, so it was a bit of a surprise. What impressed me was the level of complexity she brought to it. It was very emotional, which she was striving to get in the piece. I recognized that right away. So it struck me me as a really strong art piece when I saw it.”

Chitadze thinks that the best part of creating art is being able to express herself.

“I know everyone says that, but it’s kind of true,” she said. “You can really see an artist’s emotion through their paintings.”

She also had some advice for anyone else who wants to compete.

“Probably do something that you know you’d be really good at, something you’ll enjoy, because that’s always the best,” she said. “It will turn out the best if it’s something you really like.”