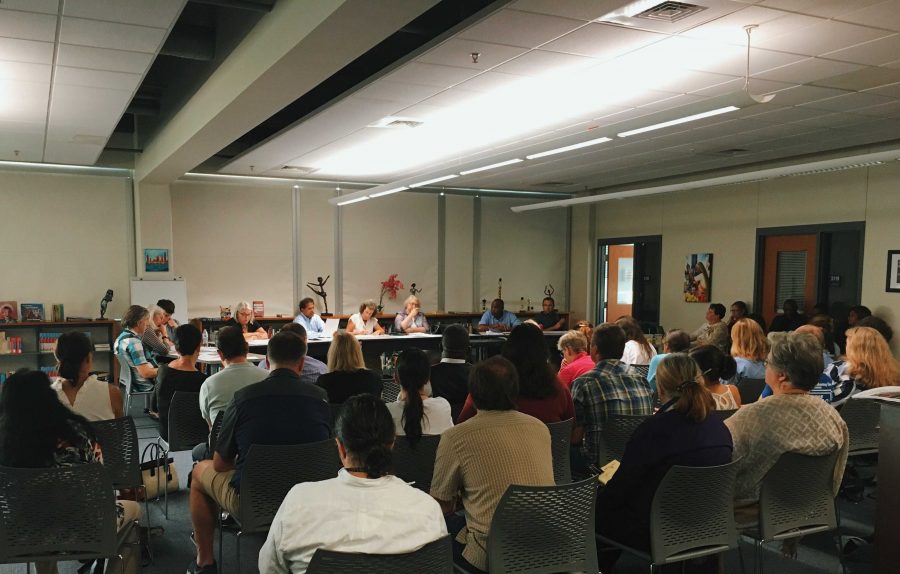 On Monday, September 17th, administrators, teachers, parents, and students congregated in the library for the second Governing Board meeting of the 2018-19 school year.  Key topics on the agenda: the freshman academy, the budget, class sizes, and scheduling issues.

Materials which pertain to these issues were requested by the board members during the August Governing Board meeting. However, the administration failed to produce the detailed information that the board had asked for.

“Rebecca Braaten was told that she needed to provide more data regarding the freshman academy, a budget, and data regarding class sizes in advance of the September meeting,” said Chamblee parent Jean Cowan. “None of these criteria were met by Ms. Braaten.”

Many were also dissatisfied with the short notice with which the information was shared with the board.

“None of this presentation material or report material was distributed with the agenda to allow stakeholders the opportunity to review and formulate intelligent questions,” said Bonnie Buell, the parent representative of the board’s Tricameral Advisory Council.

Despite a lack of documents and figures, those present at the meeting still discussed the three major issues mentioned above. Faculty, staff, and students alike were concerned by what they heard.

One of the main frustrations voiced at the meeting was the absence of a proper budget for the 2018-2019 school year. The budget the school is currently using is a “roll-over” budget, with a few alterations, from two years ago, when Dr. Norman Sauce III was principal of CCHS. At the August board meeting, Braaten was asked to provide the board with an updated budget for this school year.

“Instead of producing an actual budget, in the way that both the DCSD demands and that every booster club, PTSA, and athletic club must present, [Braaten] instead passed out a 6-page spreadsheet with a list of items spent and purchase orders pending,” said Buell.

An outdated budget can have serious implications for the school. A changing student body, new programs, and different priorities must be accounted for in deciding where the school’s money needs to go. This means that careful planning must be conducted several months before the start of the year.

“I think the faculty all wish that the budget had been handled as it had been the prior year, when it was done well in advance with lots of faculty input, and we weren’t waiting for funds to be released at the start of the school year,” said math teacher Andrew Milne, the Tricameral’s teacher representative.

In addition to insufficient material concerning the budget, Braaten and the administration also presented convoluted and contradictory information on both the freshman academy and class sizes.

“She [did not] have a concrete plan or structure in place for the freshman academy, despite it being almost two months into the school year,” said Cowan. “Based on class size data, it appears that many classes are still above the acceptable size and numerous teachers have more than 180 students, despite Braaten saying these [issues] had been corrected.”

General dissatisfaction resounded among many parents and faculty following the meeting. They feel as if their concerns are going unheard and that nothing is being done to fix the problems Chamblee currently faces.

“It feels like our pleas and complaints fall on deaf ears, or those in power to make change do not bother to come listen to the many problems facing CCHS,” said Cowan. “It seems that the CCHS Governing Board is sympathetic to the problems and they are supportive of making change, but their limited power makes that impossible.”