The Blue & Gold • May 1, 2019 • https://chambleeblueandgold.com/7250/news/art-teacher-lisa-guyton-to-retire-continue-to-inspire/ 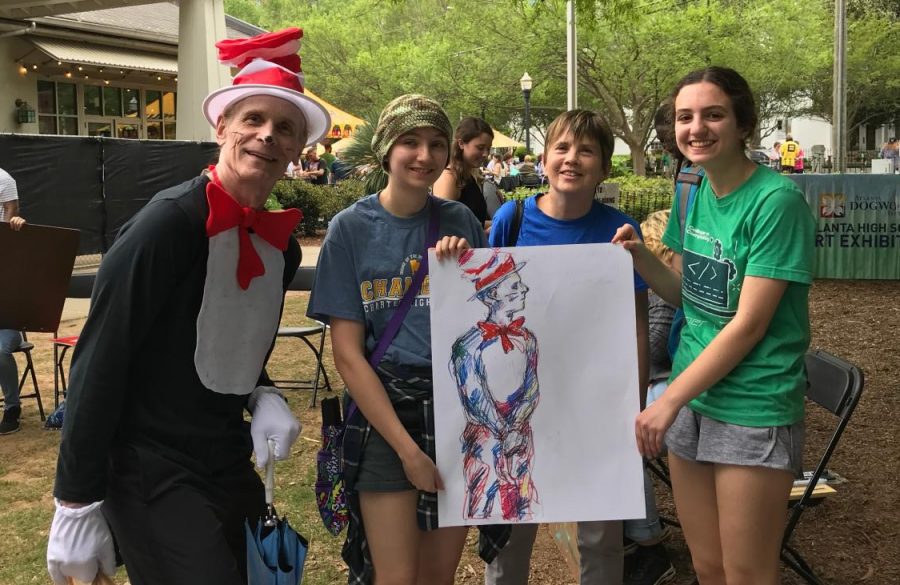 Guyton with some of her students at the Art Throwdown competition on April 13.

In her 13 years at Chamblee Charter High School, Ms. Lisa Guyton has changed many lives, enlightening students to the power of a rigorous art curriculum. She has taught Drawing, Painting, Sculpture and AP Studio Art, and recently started teaching Ceramics. She has also served as the sponsor of the Art Club and has helped to coordinate Chamblee’s Art Show, which occurred this year on Thursday, April 18, throughout her years here. She also served as the National Art Honor Society sponsor for about ten years. As she plans to retire this spring, sophomore Iris Tsouris can attest to the impact Ms. Guyton has had on her art career.

“Ms. Guyton has instilled within me a passion for art that I would say I didn’t necessarily have before I came to high school,” said Tsouris. “She’s introduced to me a lot of concepts that I wasn’t really exposed to before then. I remember often we’d do critique in her class and being able to gain that feedback is really important.”

Junior Klara Nitsche is grateful for the encouragement Guyton has given her. Like Tsouris, she finds feedback important.

“[Ms. Guyton has] helped me a lot,” said Nitsche. “I like using colors a lot, and she’s really promoted that. […] Especially, last year when I brought in a painting of my dad, she really liked it. She kept encouraging me to use more and more colors and gave me suggestions, so her critiques were always helpful.”

Guyton says her favorite part of teaching is seeing the students grow and where they go after they graduate.

“I really enjoyed trying different projects [with the students] and also seeing how some students have gone on to study either Art Education or some type of art, either Studio Art or Design,” said Guyton. “I’ve had a number of people going into [art fields], and that’s been really rewarding.”

She also reflects on the school’s transitions between buildings and administrations.

“[I’ve been] working here and seeing the school go from the old building to the new building,” said Guyton. “I’ve been here for that whole transition period, so there’s been many changes with that and the different principals. Every year has been different. Every year is new.”

Guyton became an art teacher after she studied it in college.

“I had done journalism work when I first got out of college and then I got a Master’s in Art, so I was looking for something that would allow me to continue doing my own work but also be a job that I could make some money,” said Guyton. “That was how I ended up in art education because I wanted to stay in the art field but it’s not easy to make a living.”

Guyton taught at multiple schools before she found CCHS.

“I taught in Connecticut in a private school and then when I moved to Atlanta, I looked at some private schools but then ended up getting certified to teach in the public schools,” said Guyton.
“I taught at [an elementary school] in DeKalb and then here at Chamblee. I knew I wanted to work with high school versus the younger children.”

The art department now is very different than it was when Guyton first arrived.

“[When I first arrived,] there were all three new art teachers and we only had two art rooms, so we had to float into one room and share,” said Guyton. “Then, one of the art teachers left so we only had two teachers. So that happened for a number of years until we came into this building and we added another art teacher again because of our enrollment going up.”

One of the major differences over the years has been enrollment and class sizes.

“Having three art teachers is definitely ideal or even more, as far as the number students interested, because class sizes have also gotten bigger,” said Guyton. “When I first started, the classes were 20 to 25 students or less. Some of them were even smaller, so that’s been a big change – the sizes of classes.”

Tsouris is very inspired by the work Guyton has done. She sees Guyton’s mentorship as well as the opportunities she has fostered as important.

“During sophomore year, […] I started attending Art Club and getting to know her more as a person and she actually wrote my GHP recommendation and some other art camp recommendations that I had,” said Tsouris. “I got to know her more and she really helped me grow as an artist, and she became a really important teacher and mentor in that sense. I’ve done a lot of competitions through her, like the Art Throwdown [on April 13], and she was very supportive through that. She was really important to have in the artistic side of my life at that point.”

“Because [Ms. Guyton has] been here and she’s been teaching art, she’ll serve as an introduction to art for you in a more serious sense,” said Tsouris. “I remember, eighth grade was not very serious in terms of art. […] When you would go into high school and Ms. Guyton is there, she’s going to be the one that’s actually going to show you how much more art can become. Just that contribution to the school, to helping people grow as artists, exposing you to different media and different ways of creating art, and not limiting you… I really felt that Ms. Guyton contributes that to the school environment.”

“She gets really involved with the students, so she likes to walk around and she’ll really ask questions,” said Nitsche. “She likes to look deeper into students’ pieces’ meanings so it’s not just glazing over which is nice. She likes to have a lot of different approaches like drawing still lifes and having more conceptual pieces.”

In addition to her art classes, Guyton also cultivated a positive environment in Art Club. In the past month, the Art Club participated in the Memory Project, a movement where they painted orphans from Peru.

“Art Club is honestly the best. The environment is so nice, and it is so peaceful, and we have a student leader, Klara [Nitsche], and she sort of leads it, and Ms. Guyton fosters things through it,” said Tsouris. “We did the Memory Project through Art Club which is the orphan project and we’re also doing the Art Throwdown competition this weekend [April 13]. I feel like Art Club is just a general extension of art class, except it’s in such a peaceful environment and it’s like a little community.”

Nitsche, who served as the captain of the Art Club, says Guyton encourages students to discover in its meetings.

“She’s also really involved with that one too,” said Nitsche. “She helped contact the school to get dates for the Bake Sale. […] She really likes to make an effort to get to know what the students want to do, so if they want to do watercolor or acrylics or if they want to look at the books in the back of her classroom… She really encourages getting involved with not only painting yourself but also working with other people and exploring different techniques.”

Tsouris finds the advice Guyton has given her impactful.

“Probably my most important memory was during Art Club where I was just talking to her about my future,” said Tsouris. “I said something about how it might not really be possible for me to study art in the future if it’s expensive or something, and Ms. Guyton said, ‘Yeah, but that won’t really affect it because if you have an inclination to make art, at some point in your life, you’re going to make art regardless of what you study, regardless of the path life takes you.’ I thought that was really powerful.”

Guyton sees the most rewarding part of teaching as watching the students’ progress unfold.

“I would say just getting to know the students and seeing what they can do and seeing them develop over either just one year or a number of years if they stay with the art program,” said Guyton. “I think at the end of the year, at the Art Show, it’s particularly exciting just to see all the work, and parents coming.”

During retirement, Guyton is planning to continue pursuing art.

“I have an art studio here in Chamblee, so I work there on the weekends, so I’m planning on continuing with my own work, my painting and drawing,” said Guyton. “And then, I’m hoping to teach part time with some adult classes like at the Spruill Center or some other places to teach, but not full time.”

As one final remark, Nitsche would like to express gratitude for Guyton.

“I just want to say that I’m thankful for her because she’s unlike any teacher I’ve had before, and I’ve learned a lot from her and I definitely won’t forget her in the future,” said Nitsche.