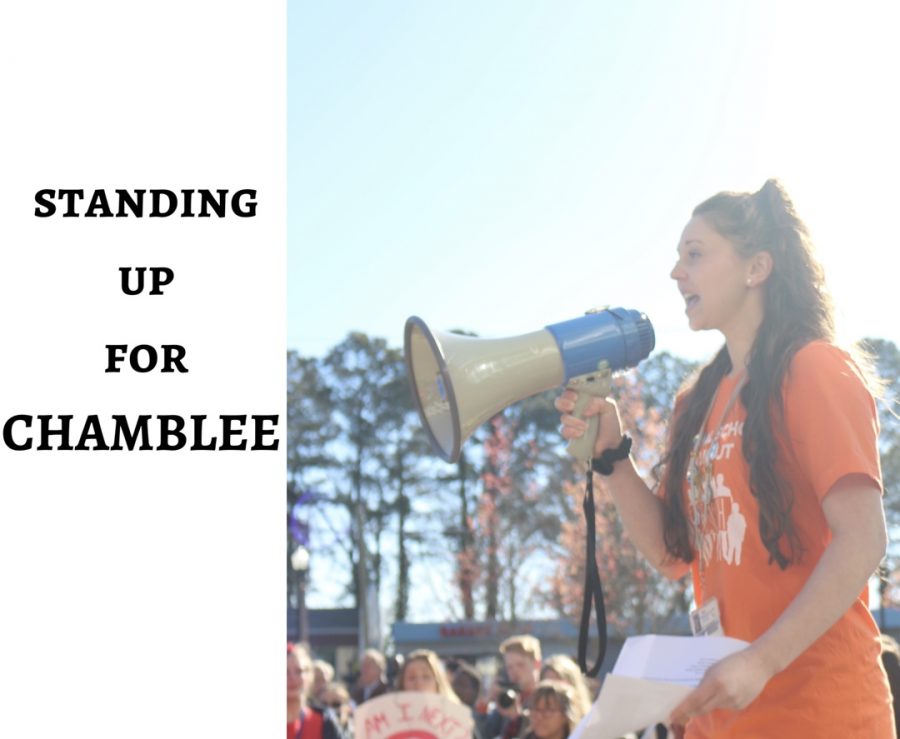 Along with exam season and end-of-the-year traditions, May also brings Student Government Association (SGA) elections to Chamblee. SGA consists of a group of highly involved students motivated to create change within Chamblee. Each May, rising sophomore through senior officers are elected to office to represent their graduating class, as well as student body officers to represent the school as a whole.

Competing for student body president were juniors Lucy Adelman and Hannah Boyer. Both campaigned for the position using creative posters and Instagram stories.

“[Campaigning] was actually a lot of fun, because I met a whole bunch of people,” said Adelman. “I started by going around to people during lunch and just introducing myself, saying the ideas that I had, asking them what they wanted to see.”

Adelman’s persistence paid off – she won the seat and next year will represent the entire student body. The student body vice president is junior Abby Washburn, and the secretary is junior Kieran Ferguson.

“I attended Camp Coleman [a Jewish summer program in Sandy Springs, Georgia] for eight summers, and a lot of the people that go to Coleman are from South Florida. A lot of my friends go to Marjory Stoneman Douglas High School,” she said. “One of the girls who was killed, Alyssa Alhadeff, was a year younger than me, and she went to my summer camp. That’s what pushed me to get more involved and stand up for something, because I wanted to stand up.”

After the shooting, Adelman worked with the student body president at the time, Jake Busch, to organize two school walkouts in protest against relaxed gun legislation. Several months later, she ran for junior class president and won. Throughout the 2018-2019 school year, Adelman has been serving her class and the entire school, but wanted to take this representation to the next level.

“I really wanted to run for student body president, because I feel like over this past year, I got an understanding of the joy that’s needed in the school and also the representation that’s needed in the school,” she said. “A lot of that came from going to the governing board meetings and hearing [things from both the adult and student perspectives] and just kind of [acknowledging] the need for more uplifting events within the school and the need for more representation.”

Motivations for running for office are widely diverse across the candidates.

“One, obviously, I’m running to help the school,” he said. “Two, obviously, [I’m] running for my college [application], and three, because who else could do a better job than me?”

Markiewicz relied on his sense of humor for a victory, making a speech calling out gender discrimination in Instagram comments as a part of his campaign. This, however, was not enough, and Markiewicz lost the presidency to junior Solange Jackson. The other senior class officers are vice president Jawwad Uddin and secretary Kathryn Penn.

For the rising junior class, sophomore Claire Turney ran for president and won.

“Our current sophomore president, Livi Hogan, is doing a full year German exchange next year, so I figured I’d step up,” she said. “I’m excited to take on more leadership, and I’m involved in a lot of sports and clubs around the school, so I think I represent Chamblee and the class of 2021 well.”

Turney’s vice president is Ayushi Mukund and her secretary is Victor Lim.

Another presidential hopeful for the rising sophomore class, Sanjeev Anand, ran because he wanted to see a change in the school’s representation.

“The leadership we’ve had in this school has been the same since possibly even middle school and frankly, I’ve just been running because I want to implement some change again,” he said. “I feel like I would be the best candidate for this, because I’m a hard worker and because we’ve had the same president for over four years right now [freshman Alex Jovanovic]. He’s one of my close friends, but I feel like I can make changes to the school and I could lead it without hesitation to basically allow people to get more chances to go and do more activities.”

Like Markiewicz, Anand lost the bid for the presidency to Sarah Duong. Duong will be working next year with Joanna Louis-Ugbo as vice president and Naeem Islam as secretary.

Victorious or otherwise, all of the SGA officer hopefuls shared one common objective: to improve Chamblee.

“[My goal is to] keep people happy, keep them feeling like this is their home, because it is,” said Adelman.