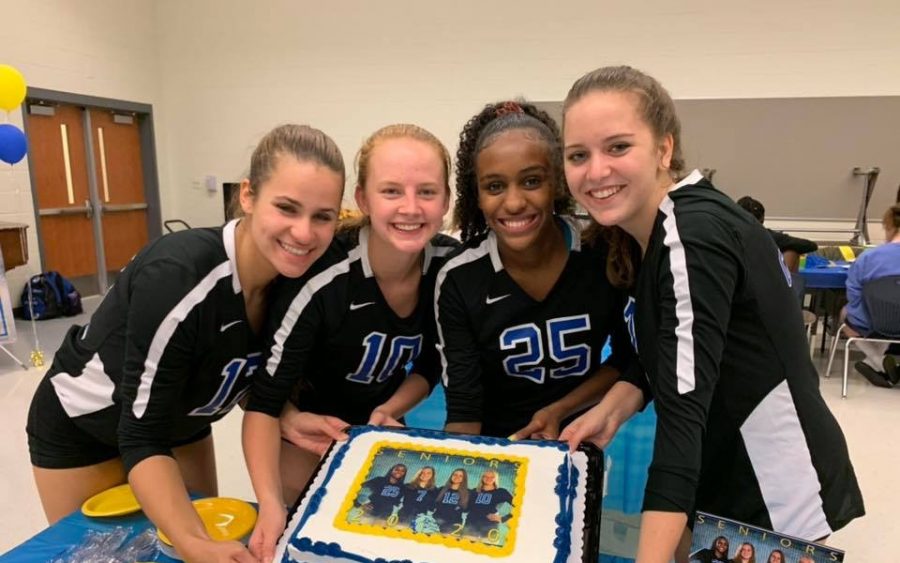 The Chamblee Charter High School Lady Bulldogs team had a very successful senior night on September 26th, starting with a 5pm game of two sets against Dunwoody. The first set was close, but Chamblee won by two points with a final score of 25-23. The second set also went to Chamblee at 25-21. The team played their second game at 7pm against North Atlanta with two very successful sets, first winning 25-17 and later 25-14.

Lorri Reynolds, teacher and Chamblee volleyball coach sees these wins as yet another highlight in an already excellent season.

The game was also an opportunity to highlight the accomplishments and goals of the four graduating seniors: Ava Grace Samford, Debbie Kitzler, Becca Evans, and Erin Carpenter.

Samford, who plays middle, has played for five years and plans to play volleyball at the club level in college, where she will study animal health and follow a pre-vet pathway. She currently has a 4.3 GPA and also participates in NHS, Beta Club, where she holds an officer position, club volleyball, and volunteers at a veterinary office. Samford wants to be remembered by her teammates for her sense of humor and short term memory on the court. Her fondest memory is beating North Gwinnett her junior year.

Middle blocker Debbie Kitzler plans to go to Georgia Tech or Duke and go into biomedical engineering. She currently has a 4.4 GPA and also participates in NHS, German Honors Society, teaches dance to children with special needs at The Atlanta Dance Academy, volunteers at Children’s Healthcare of Atlanta, and peer leads at her temple. She wants to be remembered for her sense of humor and being the loudest one on the court besides Coach Reynolds, of course. Her fondest memory is carbo-loading and movie night before elite 8 game against McIntosh during the 2018 season.

Becca Evans, outside hitter, has played for six years. She currently holds a 4.1 GPA and participates in club volleyball and NHS outside of school. She wants to be remembered by  her teammates for her “five star slaps” and her fondest memory is beating North Gwinnett for the first time.

Setter Erin Carpenter has played for seven years and plans to play Division I volleyball at Western Carolina University. She currently has a 4.1 GPA and also participates in NHS and club volleyball. Carpenter wants to be remembered by her teammates and Chamblee friends for her being fierce and hardworking.

Reynolds is close with the graduating seniors and noted their role in the larger growth of Chamblee’s Volleyball as a whole.