How Faulkner Helped Me Reconcile My Southern Upbringing 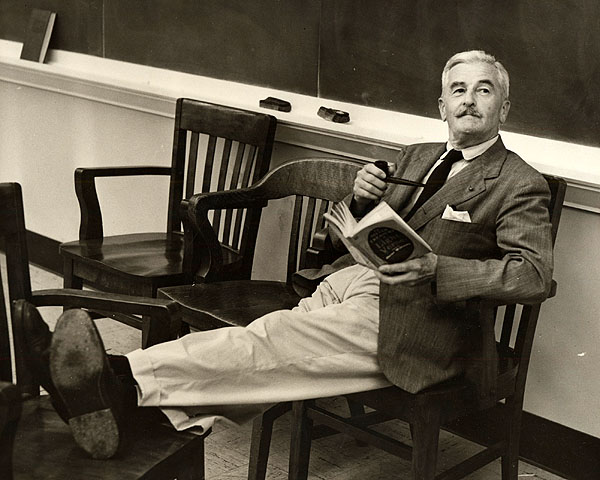 Faulkner chillin' with a book.

Adolescence is a time marked by challenging the ideas of your parents, your teachers, and the world around you. I’ve always found this strangely comforting. Youth activism, be it for climate change or the desegregation of schools, has always been a reminder of hope for the future, specifically designed to show the adults we challenge that times are changing for the better.

But growing up in the American South can make this rebellion seem difficult. As a liberal-minded teenager, it’s hard to watch your state show up red on every political map. It’s hard to learn about the racism that has pervaded almost every aspect of the South’s history. It’s hard to feel like a place you live is stuck in the past or incapable of growth.

This isn’t to say that racism is in any way limited to southern borders, it’s just that the culture of the south is so rich with historical wrongdoing and disgusting discrimination. The south has an incredible gift of making the innocent seem at least a little bit horrifying. I grew up playing in the mossy streams of Stone Mountain Park, for example, but would come to find out just a few years later that it was also the place where the Klu Klux Klan saw its rebirth in 1915.

As the election of 2016 seemed to escalate the already intense institutionalized racism in the United States, my relationship with the south started to deteriorate even more. Whether it be the Unite the Right Rally in Virginia or the constant killing of unarmed black men by police, it felt like southern dedication to refusing change was far more powerful than my belief in the rebellion of youth or times changing for the better. The south seemed too deeply entrenched in the refusal to grow that my faith in my home disappeared.

But getting the chance to read the work of William Faulkner helped me start to see the American south as a place of distinct culture, tragedy, and hope.

William Faulkner, who’s best known for his novel The Sound and the Fury and short story A Rose for Emily, is not known as being easy to read, brief, or particularly enjoyable to high school students. Before reading The Portable Faulkner collection, I’d only read A Rose for Emily, and was utterly confused as to both the content of the story and the reputation of the author. I couldn’t understand why it was being taught or why it stood out among other authors of short fiction, like Hemmingway and Salinger.

But after reading the story three more times, along with some of Faulkner’s other works, his role in the canon of American literature and southern culture started to feel obvious and almost vital.

Faulkner built an entire lineage of characters and an expansive fictional county to honestly and brutally depict the tragedy of racism that plagued the south he knew. Some stories, like That Evening Sun (1902), are written from the perspective of young children, showing the ways in which the ill treatment of black individuals can quickly be passed to those who don’t know any difference.

These stories, filled with racial slurs, horrific cruelty, and truly saddening accounts of dehumanization by white southerners, show the south for what it was. Reading about and trying to understand how this history affects us today is the only way to rebuild and grow.

History textbooks, to me, can only do so much to encourage change. It’s stories like these that do not shield but subject the reader, in all its grit and horror, to the pervasive nature of racism.

As a young white woman, I have never experienced racism firsthand. I cannot think of a reason that I ever would. But I should not have to in order to care about the state of systemic racism in this country. Any brief glance at the news supports the idea that white supremacy is alive and well, especially in the south. Living here and calling it home is not something to be ashamed of, as long as we, as southerners, work to change the egregious injustices of the past and present.

Learning as much as possible about our history and identity is the first step in understanding the many faces of racism today. Discrimination and abuse of privledge may rear its head in our elected officials, our voting policies, and our education system. But this is not beyond hope or even repair. Systems built for another century can be deconstructed if we know what they look like, and the only way to do this is to find the roots of these systemic injustices.

Faulkner may not be the only way to grapple with a southern identity. His writing, however, is undoubtedly an incredible lesson in the history of the American south and is an excellent way to begin understanding that change is within our grasp, and it will come as soon as we recognize why we need it. Faulkner’s cinematic eye and incredible articulation of life in the south is just what I needed to realize this.

It’s ignorant to believe that change is concrete. Changes are made slowly, begrudgingly, and sometimes with absurd difficulty. But when I look at Faulkner’s writing and his unapologetic honesty about his home, it reminds me that activism comes in all forms.

Watching the politics of Georgia and neighboring states is often painful, especially as someone who feels so strongly about racial equality. But defeatism is not going to change policies that belong to a not-so-distant past, it’s going to allow them to persist.