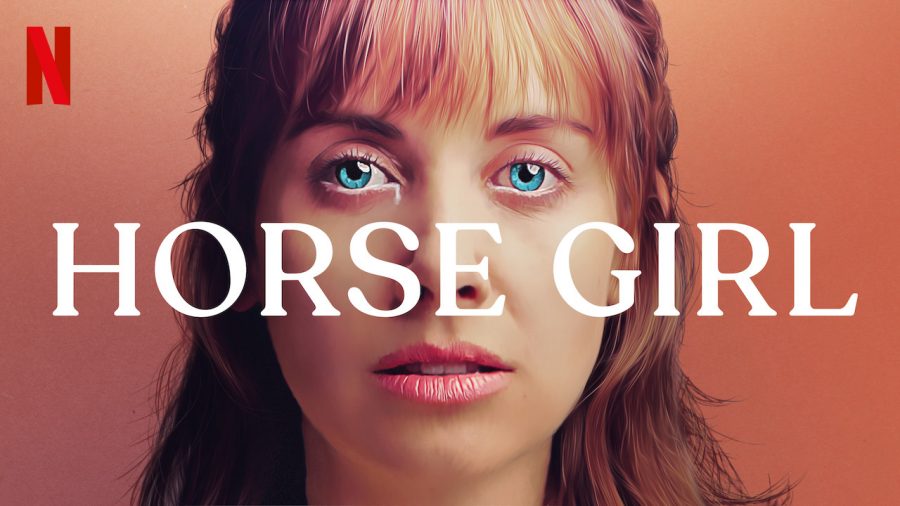 I’m pretty sure most high school students are familiar with the idea of a “horse girl.” The term sparks imagery of long-haired elementary classmates with a strange affinity for the animals that adorned every folder, notebook, and t-shirt they owned. But the name also holds a bit of hostility and serves as a reminder that the receiver of this insult is different from you. Stranger somehow.

So when you read the title of this film, it seems like it’s going to be about someone slightly out of touch, a little quirky, but not altogether isolated or idiosyncratic. In many ways, yes, it is about that. But it’s also a striking commentary on the treatment of mentally ill people- and what can happen if two realities refuse to be reconciled.

Disguised as an indie-romance, Horse Girl begins by introducing Sarah (played by Alison Brie), the film’s protagonist and dedicated craft store employee. Her life is by all definitions monotonous, especially compared to that of her roommate and other women her age. But as Sarah starts to have vivid nightmares, sleepwalk, and have visions of people she’s never met, she begins to question her grip on reality, as well as what it means to be human.

Without spoiling anything about the film’s plot, Horse Girl challenges what it means to talk about mental health in entertainment. Many films and TV shows, especially produced as Netflix Originals, include a trigger warning before discussions of the things Sarah struggles with. But what’s really original and thoughtful about Horse Girl is that, on the surface, this film isn’t about those struggles. Many moments, including the ambiguous ending, dip a toe in genres like sci-fi and fantasy. Clips of the supernatural crime show Sarah watches, for example, are so integral to characterizing Sarah and moving the plot forward, that viewers may find themselves questioning exactly what kind of movie they’re watching.

As a disclaimer of sorts, though, I will say this movie is definitely not for everyone. There are truly upsetting themes, an almost 15-minute dream (?) sequence that builds to the climax of the film, and, of course, the aforementioned ambiguous ending that may leave some viewers wondering if they just wasted the last hour and 40 minutes. But I would argue that once you embrace the questions you’re left with, it becomes clear how refreshing this film is.

Moreover, Jeff Baena, director of Horse Girl as well as other Sundance titles from the past few years, does an excellent job of blurring these strangely supernatural with the mundanity of human response. When Sarah eventually rejects the idea that she’s dealing with something serious and instead begins to invest in her identity as something other than human, she’s met with genuine kindness but profound lack of understanding, forcing viewers to question how they react to realities much different than their own, as well as confront realities they see as impossible.

As someone skeptical of the quality of Netflix’s original content, I was delighted to find this extremely underrated and thought provoking film in a sea of media that strictly limits itself to a single genre or theme. This is probably the thing I love most about it. This movie is so committed to making the viewer think about what reality is and how it can be interpreted that it’s been criticized for not delving into its intense themes enough. But I’d argue that this is a key point of the film’s message of uncertainty surrounding human experience. The film, by nature, can’t explore these themes in depth without forcing one conclusion or another on its audience.

Baena’s take on experience and humanity is more subdued than much of Netflix’s original films, making it an enjoyable and dynamic break from the monotonous- in more ways than one.