DeKalb’s Reopening Plan: Is it Worth the Risk? 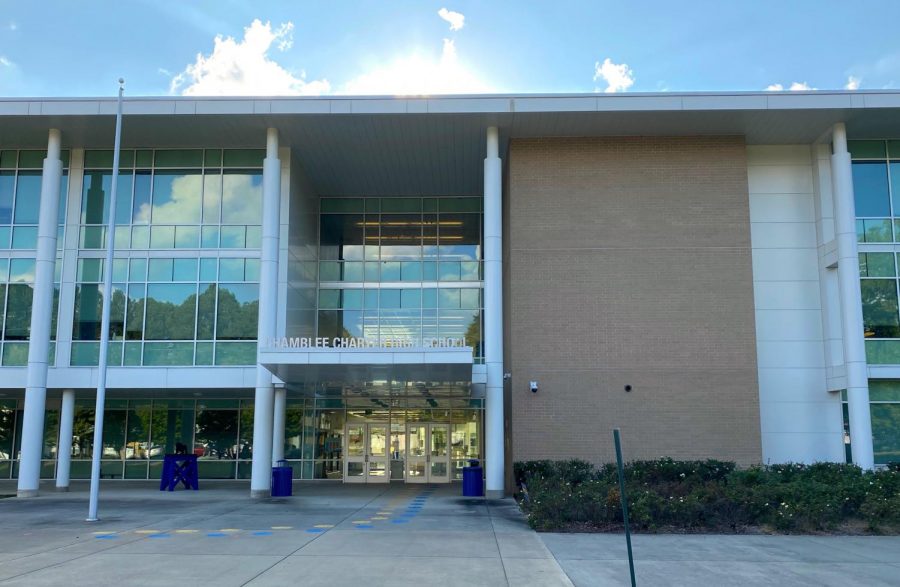 Chamblee Charter High school is currently devoid of students and teachers—but that could be set to change.

As Chamblee progresses towards its third month of virtual instruction, students, parents, and staff members have become all too familiar with the struggles of the virtual classroom. Lagging audio, meeting disconnections, and internet problems have become the norm during school days while students and teachers continue to adjust to a new schedule and shorter class times.

However, with the recent announcement of DeKalb County’s plan to reintegrate students and teachers back to the classroom, virtual learning is no longer the only option. The real question is whether it is the optimal option in providing the highest levels of education and ensuring the safety of all.
The Plan
At the September Board of Education meeting, DeKalb’s leaders came together to present a five-phase reopening plan which would ideally provide a safe return for students and staff.

The first phase, currently being implemented, includes a fully virtual experience for both students and teachers.

Phase two will be enacted when the number of coronavirus cases in DeKalb County drops from over 100 per 100,000 residents to between six and 100 per 100,000 residents over a 14-day period. The second phase, still virtual for most students, will bring teachers back to the classroom for two days a week to prepare for the next phases. This phase would also include one day of face-to-face instruction for second, sixth, and ninth graders.

The third phase, completely in-person for teachers and staff, will include one day of in-person instruction, three days of distance learning, and one day of asynchronous independent work for all students.

Phase four adds another day of face-to-face learning for students and keeps teachers and staff in the traditional working environment of five days a week.

The fifth and final phase, after cases dip below five per 100,000 residents over 14 days, would ensure a return to normality: a full five-day face-to-face schedule for everyone.
Responses to the Reopening Plan
Although some Chamblee teachers and students seem to be dissatisfied with virtual learning and its downsides, many of them are not ready for the transition to in-person learning.

The safety of the situation seems to be a concern for those who might not be comfortable with returning. The question on their minds is whether wearing a mask will be a requirement or a recommendation at Chamblee. Thankfully, the answer can be found in the Intent to Return Form issued by the county.

“Students and staff will be required to wear face coverings or masks,” stated the form.

Despite the form’s promise, it is still unclear how masks will be mandated in an in-person setting.

Additionally, math teacher Irvin Wardlow has mixed opinions about the plan and whether returning to school is the safest option.

“The plan sounds good in that they’re saying we will go back if there are only 100 or less confirmed cases per 100,000 people for 14 days straight,” said Wardlow. “I would say then that I would go back. However, in lieu of the fact that several of my classes are well over 30 and anything even close to 30 [students], you’re not going to have any distancing in my room [and] the fact that we all know that the ventilation at Chamblee is horrible, and you can’t open windows, and so despite just having a quarter of the population show up one day a week, I think it’s still not going to be safe.”

Sophomore Esther Stambler is also skeptical of the plan and its potential effects.

“I think there would probably be some COVID cases once we go back in person. I think it’s inevitable,” said Stambler. “I don’t know if it’ll work, and I don’t know what other schools are doing. It seems like a decent idea to start slow, but also if everybody’s in the building at once it just doesn’t seem like it’s going to work. I think it’ll make learning and teaching less effective.”

Others question how effective the safety measures will be when unpredictable teenage behavior is added to the equation.

“Do I think it’s going to work? Yeah, I do. I think the thing that won’t work is humans,” said Jay Cranman, the parent of a Chamblee freshman. “I think the minute humans enter that system, it’s very hard for them to stay socially distant and not be around each other. And so I think there will likely be cases of COVID that do sprout up, and then it’ll be a question of how quickly can they contact trace and send home that one classroom.”

On the other hand, some students like junior Ryan Donovan are confident in the plan and are ready to start going back to school.

“I think it’s a pretty good plan, all things considered,” said Donovan. “If everyone wears a mask, and they could open the doors and have lunch outside, that would be fun, and it would be safer anyways.”
The Return to School
On October 9, DeKalb announced that they would start the transition to a hybrid model on October 19. However, this transition has been pushed back until further notice due to a subsequent increase in COVID-19 cases, putting the number over 100 cases per 100,000 people.

Joanna Louis-Ugbo, a junior at Chamblee, will be returning to school when it opens.

“I think I would be okay with it because of the amount of people that are going right now,” said Louis-Ugbo. “As of right now, I’m comfortable with being at school because […] our school’s pretty big so it wouldn’t be too hard to space everybody out, especially because we don’t have many people going to school so far.”

In contrast, numerous people hold the belief that going back would not be worth risking their health.

“I do not feel comfortable going back to class right now,” said Kimberly Landers, an art teacher at Chamblee. “I have a health issue, and I already have lung damage. I have also not done anything for seven months and I don’t want to catch this from some teenager. So, I don’t know what I’m going to do, and that’s part of why I don’t want anything to change. I could just keep teaching like this.”

For senior Carson Ankeny, the return to school would not affect his health as much as it would affect that of others in his household.

“I’m a little bit wary of having to go back specifically because I have a 98-year-old who lives in my house,” said Ankeny. “So I would be really wanting to be sure that whatever specific coronavirus procedures are implemented, […] I would want them to be careful about that.”

Stambler agrees that assuring that the proper measures are taken when students return will ease her transition to school.

“I would feel comfortable if everyone was wearing masks properly and attempting to social distance; I know it can’t be done all the time,” said Stambler. “I also think that students are very irresponsible so that makes me less comfortable. Right now, if the school said ‘come back,’ I would be uncomfortable, but I guess if we have that many days without cases, I’d probably go back because I think it’s better than online in some ways.”
Virtual Versus in-Person: Thoughts and Opinions
The decision to return to school depends on several factors, the most important being whether virtual or in-person learning is more beneficial to an individual.

Though it’s not without its downsides, virtual learning benefits some students more than others.

“In some aspects, I prefer virtual because we have a lot more free time,” said junior Caroline Barros. “We don’t have to spend time on unnecessary things, for example: waiting for the bus to come or waiting in the gym for half an hour until class is ready. But in virtual learning when class is over, class is over, and we just go on with our lives, so I really like that. Something I don’t like about virtual learning though is the amount of work we’re getting. I think our teachers are giving us much more work.”

Furthermore, AP Biology and Biology teacher Deann Peterson believes that the in-person learning experience may not be too different from how students are learning now.

Many miss the social interaction and connection that comes with in-person schooling.

“I prefer in-person for the social aspect and the fact that in a non-virus situation I can walk around, move around the desks, help people that way,” said Wardlow. “I can be more myself.”

In the end, amidst the chaos and confusion, one fact is for certain.

The following article is a developing story and will be updated as more information is released.