Deer Overpopulation is a Problem that Needs to be Addressed 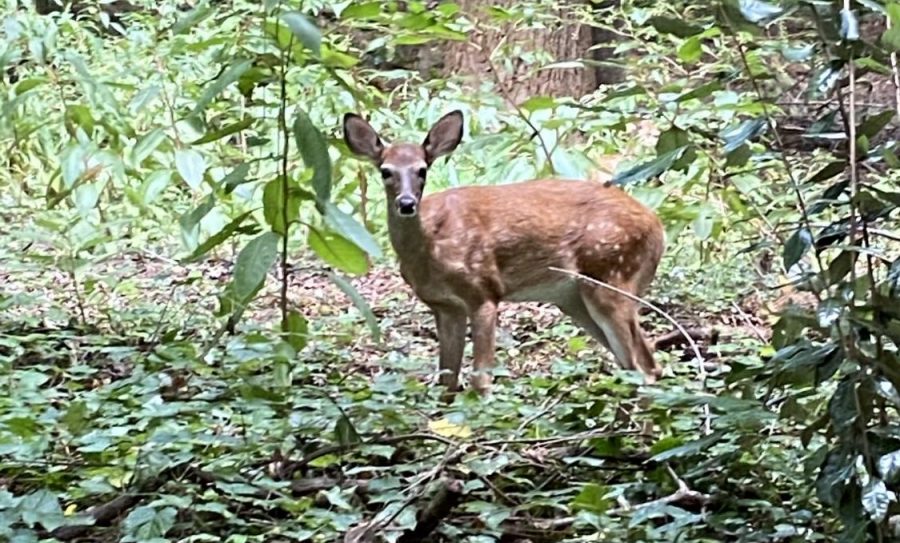 A deer at Murphey Candler Park.

Each year, my mother plants daylilies in our yard. Throughout the summer, they bloom in the early morning, and wither at night, only to bloom again the next morning. This cycle repeats itself until they inevitably fade with the arrival of autumn.

This year, we had no blooms. Every morning, before my family was awake, something came by our yard and bit the blooms off of each and every stalk. And, given that we live next to a park, it was easy enough to deduce that it was the white-tailed deer that live there who had turned our yard into their personal salad bar.

This brings me to my main point: there are simply too many deer living in suburban areas around the U.S. In the late 19th and early 20th century, deer were hunted to near extinction. In 1890, the U.S. Biological Survey estimated the country’s deer population at ~300,000. However, thanks to conservation efforts, the population rebounded–a little too well. Currently, there are over 30 million deer living in the US, and this number is increasing.

Now, this subject can be difficult to talk about without seeming like a heartless monster. No, I don’t hold any personal vendetta against the deer for eating my family’s plants, and yes, I cried with the rest of you when Bambi’s mother died. I realize that deer will be deer, and if they happen to think that daylily blooms are delicious, there’s not much I can do about it.

That said, I think too many people ignore the ecological threat of deer overpopulation just because they happen to be cute (curse you, Disney). Increasing deer population means decreasing diversity of ground cover and shrubs, and fewer tree seedlings.

This creates a dangerous ecological domino effect. The U.S. Forest Service found that in areas where deer overpopulation had been a problem, severe and long-lasting impacts remained, even after the deer population had been reduced. Many species of underbrush and groundcover were reluctant to recolonize areas as their own. This, in turn, led to a widespread decline in the populations of many songbirds who nested in the impacted shrubs.

In suburban neighborhoods and parks, though, the problem spirals out of control much faster than it does in a sprawling forest environment. This is mainly due to the fact that deer are incredibly adaptable to their environment, while their natural predators, primarily wolves and mountain lions, are not. Because of this, deer are able to multiply without the pressure of predators to limit their population growth.

What can be done about this problem? Though surrounded by controversy, the most effective solutions to deer overpopulation remain lengthening the hunting season, and deer sterilization projects.

And while these solutions seem unethical to many, they might just be better than letting the problem grow.

This article is part of a pair of opposing opinion pieces. The opposing side can be found here.