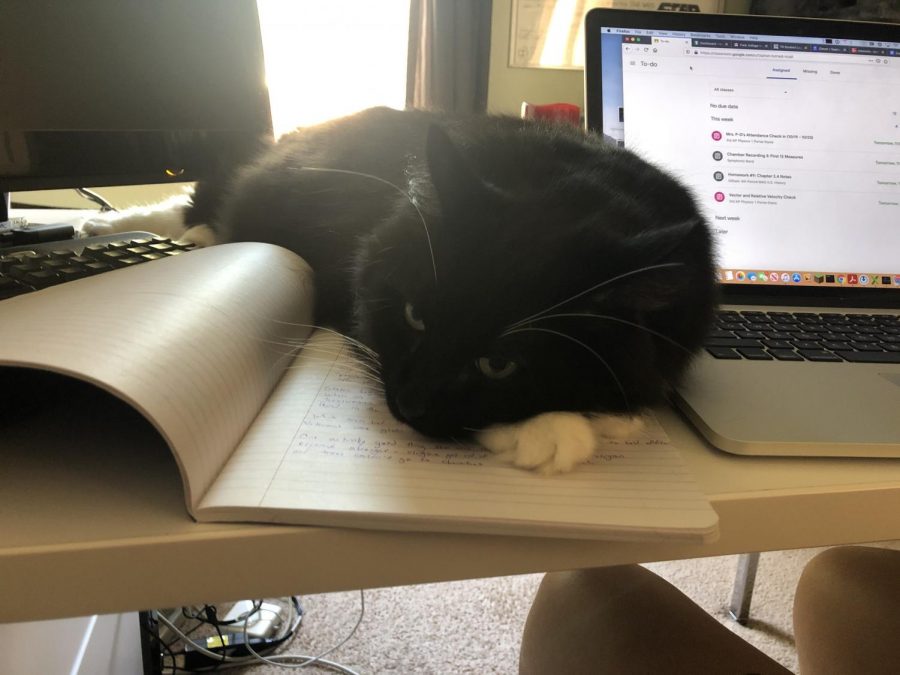 “[She is] a ball of excitement. She brightens the mood in the house,” said junior Ashvij Hosdurg about his dog, Charlie.

Throughout the COVID-19 pandemic, many students have suffered from the lack of socialization. Unable to see friends in-person, many turned to their family members, including the furry ones. While many family members can become sick of each other over the pandemic, it’s almost impossible to start fights with a loving pet.

“If you have siblings and you’re close to them […] you kind of still always have someone there [when you’re at home] but I think pets are different because they can’t talk to you and you […] never fight with them obviously, so it’s like someone that’s always just there and there’s not even a bad side [of the relationship],” said junior Olivia Shearer who currently lives with a rescue dog, Roxy, and two cats.

It’s indisputable that Chamblee students have been spending a lot more time at home, between COVID-19 precautions and online school. Many have found that the general experience with their pets is the same; they just have more time to spend.

“I am usually home and my cats will just be around. The only thing that’s different [right now] is the amount of time that I’m spending with them, but it’s really nice so it’s not [an] extreme [change from normal years] but it is different still,” said junior Lauren Vaughn, owner of two cats, Tip and Basil.

During the beginning of the COVID-19 pandemic, almost all animal shelters had to close either entirely or at least close their doors to the public. While many feared this would cause a decrease in fostering and adoption, this was not the case at all. In fact, adoptions rose during this period. Whether due to the extra time, the new school and work climate, or the lack of social time, many Americans considered adopting new fluffy friends to brighten their lives.

“We have two kittens who our friends were fostering. Our family [adopted them] because we have wanted kittens for a while and with all the time on our hands, […] it was a great opportunity to snatch. The kittens are named Calamity and Hank and we didn’t have them pre-pandemic so I don’t know what it will be like post-pandemic,” said sophomore Coco Bradford.

One major change to the school year has been the transition from in-person to online. While there are many new challenges for both students and teachers, this change has created a pet-friendly school environment for many students. Some students even take their classes now with a pet in their lap or by their side.

“[Tip] is a lap cat; he loves just sitting next to you, sitting on you, and sitting on your computer […] He’s my little school buddy, and we do school together sometimes,” said Vaughn.

Tests and quizzes are known as one of the most stressful parts of school. In an online environment, pets can now enter the testing room, giving moral support and keeping students calm.

“I remember once, in my math class, I was taking a quiz and it was really difficult. I was having a lot of trouble and when I was almost freaking out because I didn’t get it, [my dog Zelda] came into my room and she just sat right next to me. For some reason, that presence helped me calm down so much. I was able to finish it and I did well on it,” said sophomore and dog owner Navya Narula.

While pets have been fun for some students to interact with during classes, they could be distracting to some who already face distractions due to the at-home environment. Smaller pets like cats can easily crawl onto places they don’t belong.

“The only thing that is annoying is when [Tip] is crawling over my computer and pressing keys,” said Vaughn.

While other larger pets like dogs can’t jump onto desks or laptops, they can just as easily distract their owner during class. Some dog owners find their energetic dogs wanting to play while they’re busy with school.

“Sometimes […] she’s also really distracting because she wants to play. It depends [on the day],” said Narula.

Despite some distractions, most owners do enjoy them nevertheless, welcoming the chaos and fun their pet brings.

“I just try to laugh it off and I’m not usually on video for any of my classes really so it’s not that distracting […] I just welcome it,” said Shearer.

Despite the very playful nature of pets, some students have not been particularly distracted during classes.

“The cats have yet to interfere with my work, but sometimes they come to my chair while I’m in class, and I’ll give them a little pet,” said junior Brian Roberts, who owns two cats, Frankie and Fabio, and a dog named Daisy.

In addition to distractions, another major component of online school is the camera. While most students don’t turn theirs on, sometimes a pet can sneak into the frame of those who do. Some students have shown their pets after other students’ pets have joined the class.

“I [showed my dog] once because someone else’s dog came on screen and so my teacher asked if anyone else had any pets […]. My face wasn’t on screen, it was just her so I think it was nice. I know I enjoy seeing other people’s pets so I hope they liked seeing her too,” said Narula.

While some teachers may not like the distraction from class, pets might be a way to connect students and teachers during online school.

“I like seeing people’s pets during class. I think it’s fun. I think some of the things they do are really funny. I don’t think it’s distracting though. […] It makes it seem like we’re humans and not just names on a Zoom meeting, which is good,” said Vaughn.

Roberts also believes that students showing their pets can create an outlet for even more students to turn on their cameras.

“It’s either you see no one on the camera or it’s the same environment every day because people work in the same places, but when there’s a pet, everyone takes note of it and starts talking about it,” said Roberts. “I normally don’t turn on my camera, but if I were to have my pet with me and I’m like, ‘okay people need to see this’ then I’d absolutely turn it on. So if everyone was encouraged to show off their pets, then I think it could change camera usage.”

According to the Pew Research Center, seventy percent of high school students list anxiety and depression as major problems for their generation. A rise in mental health struggles for teenagers is common in almost any high school across the United States. Most pet owners feel that their animals give them much needed support, particularly in these times.

“Basil is probably the best cat for anxiety. Just being around her just makes every bit of anxiety in my body disappear. […] It’s not like a person […] trying to talk to you while you’re going through stuff, [so] it’s very helpful. So I think pets are really really good things to have, especially during a pandemic,” said Vaughn.

While almost everyone has suffered throughout the COVID-19 pandemic, pet owners have found some sense of stability and comfort amid the fears and struggle. Along with creating stronger bonds with their pets, they’ve become even more grateful for their time with them.

Along with the potential distractions during online classes, many pet owners have undoubtedly experienced funny moments with their fur babies.

“One thing about Frankie, who is the hyper one of the two twins, is he’s been jumping on top of our cabinets that are probably like 15 feet above the ground and he just sleeps up there for hours at a time and then when he comes down, it always startles me,” said Roberts.

Ultimately, the appreciation for those who show unconditional love to us has grown throughout the pandemic.

“Actually [being grateful for them is] a thing I’ve been reflecting on over the pandemic now that I’ve had more time to spend with them,” said Roberts. “It’s a lot nicer to have them because, without them, I don’t know what I’d do.”