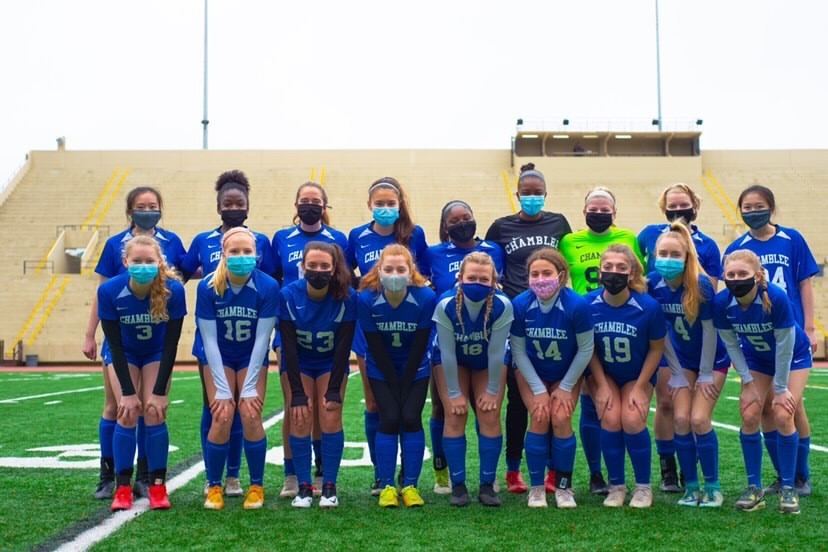 Chamblee Girls Soccer is back and thrilled for the upcoming season. Although COVID-19 has put a wrench into a lot of extracurricular activities, these forty girls are ready to play, even with the restrictions. The team initially was not sure if they would get to play this year, but after the devastating ending to last year’s season, the girls are eager to hit the field.

“[The cancellation of last season] was so horrible. At that point, we had become more of a family rather than a team,” said Dimino (‘21), whose preferred position is outside back. “We were working together, and […] we all just cared about each other and loved each other so much that seeing the previous seniors so heartbroken by their season being cancelled hurt. Seeing the whole team fall apart and not being able to do the things we used to do, like of course games and playoffs, really sucked.”

Last year, the girls were expected to go very far in the playoffs, but due to the abrupt ending of their season, they couldn’t.

“[I felt] extremely sad. We had a great team that would definitely have gone far in the state competition,” said Mattie Chloe Kaspar, the team sponsor.

Now, the girls are moving on and are excited to embark on a journey with a new set of challenges. For some girls, this is their first year on their field.

“I was so happy [that soccer was not cancelled] because I had been out for a year,” said Lauren Hill (‘23), who serves as a goalie for the team. “I was excited to finally play with everyone and after I had already become so close with them, I was really excited to be out on the field.”

With COVID-19 in mind, there are a lot of inconveniences that are bound to happen this season that would be difficult to handle without such a strong group of leaders.

“I would say that struggling to find a place to practice would be much more of an issue if our coaches and captains weren’t so on top of letting us know the changes as soon as they know, but sometimes the places we practice aren’t in the best condition, with Montgomery being super muddy on Monday, or we have field changes last minute that can negatively impact what we learn from the practice,” said Clayton Anderson (’24), who usually plays as outside back.

Along with the inconveniences, there are a lot of adjustments the team has to make to ensure everyone is safe, including the use of masks when not actively playing, trying to stay spread out during group discussions, and no fans in certain stadiums. A lot of the restrictions are self-employed, which means that Chamblee must trust the other teams to follow the same actions, which can be nerve-wracking.

“[Playing during the pandemic] is kind of concerning at times, especially when we play other teams who may be already in school and we don’t know how careful they’re being,” said Hill. “But, with our team, I feel that we are being super careful and that makes me feel safe.”

Just like every other Chamblee sport and activity, the team is taking precautions and watching out for one another.

“The girls have been very cautious. They always wear their mask even during play which they don’t have to,” said Kaspar. “Being outside, practicing distancing, and how diligent the girls have been all make me feel safe […] Everyone brings their own water, and we are trying to use buses as little as possible.”

Tuesday, February 2 was the official kickoff for the varsity girls team. With a win of 4-0 against Druid Hills, the girls knew they were a force to be reckoned with.

The JV team’s kickoff was the next day, and the girls secured a mercy win of 10-0 against Duluth.

“I was feeling good after the first game, but I felt there was still room for improvement on a personal and team level. I was thinking that win was a great start to what is going to be an awesome season,” said Anderson.

While basic touches and communication are always great places to start, Silverman, who co-captains the team with fellow senior teammates Megan Woo and Maci Yeager, wants to help lead her team to success by continuing to push them to their full potential.

Outside of the games, the team’s favorite activity seems to be the coveted soccer sleepover held in January. It has been noted as a great bonding experience that helps the girls grow a tight bond.

“In the second semester of my junior year and everyone was together, [we had the sleepover] and I was still pretty shy and relatively new to the team,” said Dimino. “It had only been a month at the point, so really feeling like I could get out of my shell and get to know everybody made me comfortable and a lot more excited for the season.”

The girls are always willing to invite new members into their family.

“Do it! ” said Dimino. “When I tried out, it was the best decision I ever made. I have never been happier or loved a group of people more than I love this group of people. It is so much fun. And if you’re thinking about trying out but aren’t sure, do it. It is worth it!”