MLB’s Foreign Substance Problem and How to Fix It 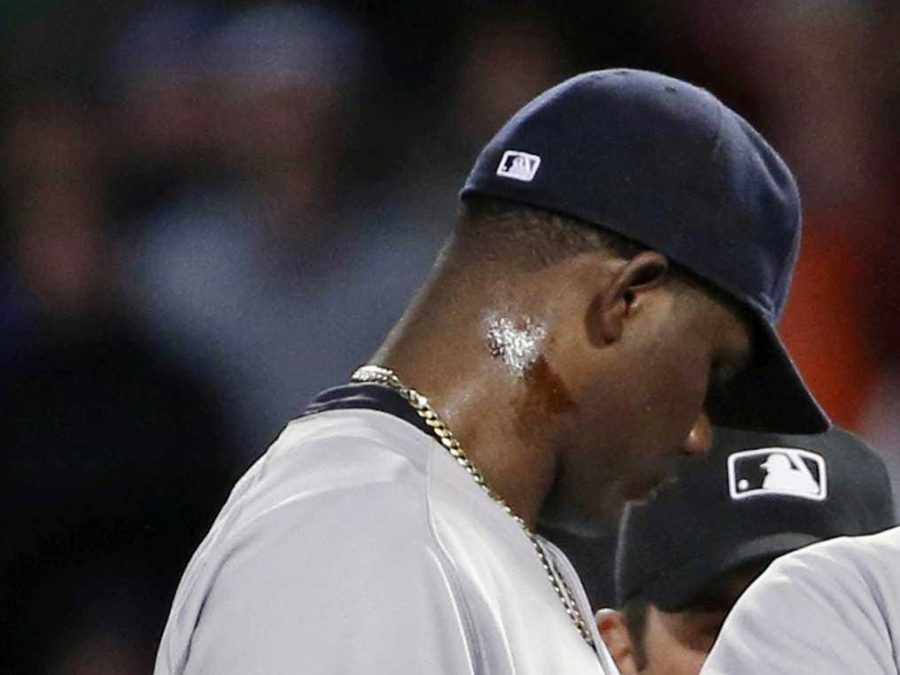 The day is April 23, 2014. It is a cold and windy Boston night. Red Sox outfielder Grady Sizemore digs in at the plate against Yankees pitcher Michael Pineda. The count is 1-2, and Pineda is one strike away from finishing the second inning.

Before Pineda can throw his pitch, Red Sox manager John Farrell calls time and emerges from the home dugout. Farrell says something to home plate umpire Gerry Davis. You can’t hear what he’s saying, but by his body language, he is clearly upset about something.

The live feed cuts to Pineda, standing on the pitcher’s mound, looking slightly annoyed. He just wants to finish the at-bat and get out of the inning.

Instead, Davis approaches Pineda at the mound. He examines Pineda’s glove. He has Pineda stick out his hands and turn them over. Pineda turns his back to Davis as the umpire looks him up and down, scanning for anything out of the ordinary.

Finally, Davis tugs off his glove and touches a spot on Pineda’s neck. He nods an affirmation to the other umpires that have by now gathered around the mound, and then promptly ejects Pineda from the game.

The camera zooms to a close-up tracking shot of Pineda as he walks off the mound towards his dugout. The stadium lights glisten off the patch of pine tar on his neck.

Major League Baseball rule 3.01 says that no player shall intentionally discolor or damage the ball by rubbing it with any foreign substance. Rule 6.02 says defacing the ball “in any manner” is not allowed.

So yes, Pineda was guilty. But why does this rule exist?

One hundred years ago, baseball was very different. Among other things, pitchers had every right to tinker with the baseball to make it harder to hit. They scratched it, cut it, and covered the ball with saliva, mud, licorice, and tobacco juice, both to discolor it, thus making it harder for the batter to see, but also to make it move in unpredictable ways.

One hundred years ago, they would also use the same ball for nearly the entire game—a far cry from the average 120 baseballs used in an average nine-inning game nowadays. This meant that by the end of the game, the ball was a deformed remnant of its original form, and was nearly impossible to hit.

Then, on August 17, 1920, Ray Chapman, shortstop for the Cleveland Indians, was hit in the head by a pitch that he couldn’t see. He collapsed, bleeding from his left ear. He was then rushed to a hospital, where he died 12 hours later. And as a result, Major League Baseball made the spitball illegal.

So here we are 100 years later, and pitchers like Pineda can still get in trouble for using a foreign substance like pine tar while pitching. But should they?

Historically, pitchers have used pine tar and other similar sticky substances for one reason: to get a grip, so to speak. The sticky resin helps a pitcher keep a grip on the ball as they pitch. It isn’t a spitball, and it isn’t supposed to make the ball harder to hit.

I have very little doubt that that is the sole reason that Pineda resorted to using the substance back in 2014. He said after the game that he couldn’t get a grip on the baseball and began using pine tar after the first inning for fear of losing his grip and hitting a batter. And as far as I can tell, given that it was the type of cold, windy night that turns the baseball into a chunk of ice, that checks out.

I don’t think that there is anything wrong with this. And clearly, MLB players don’t either, as it has been guessed by players that upwards of 70% of pitchers use a foreign substance while pitching, regardless of what the rulebook says. This too makes sense, as it’s in everyone’s best interest that the pitcher knows where the ball is going—when a batter is hit by a pitch, the pitcher is upset that he has allowed a free baserunner, and the batter is upset that he was just beaned by a small white ball traveling upwards of 90 miles per hour.

Hitters have been interviewed as recently as 2018 about the usage of pine tar by pitchers, and have expressed their support for the substance. The sentiment is summed up by outfielder Adam Jones: “I use pine tar on my bat so the bat doesn’t slip out of my hands, so a pitcher can use pine tar on the ball so it doesn’t hit me in the face.”

Because of this universal acceptance within the game, ejections like Pineda’s don’t happen very often in baseball, because of an unspoken agreement between teams. It’s a “we won’t call out your guy if you don’t call out our guy” sort of mentality.

But recent advances over the past few years in sabermetrics and analytics have shown that these foreign substances may just be misunderstood, and it has everything to do with spin rate.

Spin rate represents the amount of spin on a baseball after it is released from the pitcher’s hand. It is measured in revolutions per minute. League average spin rate is right around 2,250 rpm. And spin rate is everything to a pitcher.

Essentially, there are two kinds of pitches. Fastballs have backspin, and breaking balls have topspin. And the more spin they have, the harder they are to hit. A high spin rate is what makes a fastball look to the batter like it is defying gravity and rising. It is what makes a breaking ball sharply drop out of the hitter’s bat plane.

So it would be crazy if there was a simple and accessible way for any pitcher to instantly increase their spin rate 200 to 400 rpm. Well…

The longer the baseball sticks to the pitcher’s fingers before being released, the more spin it will have. It’s as simple as that. But pine tar, which was only ever for grip, doesn’t cut it anymore. Instead, pitchers have been on the hunt for the best possible formula to increase their spin rate, going so far as to hire chemical engineers to experiment with different substances.

This is a problem. These substances are no longer being used to simply get a grip on the ball. They are granting a real and measurable advantage to the pitcher. And in a league that is already trending towards lower numbers of balls in play, this is certainly not helping. Each year, the three true outcomes–walks, strikeouts, and home runs–become more prominent. Each year, there are fewer base hits. There are fewer races to first base, fewer diving catches, and in general less exciting moments. And the ever-present usage of foreign substances by pitchers is largely to blame for the increasing numbers of strikeouts.

Major League Baseball needs to crack down on this. But what the league really needs is transparency. MLB can try to be stricter and more scrutinizing when it comes to ejecting pitchers for foreign substances. But nothing will really change unless they first relax the rules concerning pine tar. When every foreign substance is prohibited under the umbrella of rules 3.01 and 6.02, pitchers will continue to take the risk of using specifically spin-increasing substances.

But by legalizing the use of pine tar by pitchers while cracking down on other substances, MLB can create transparency while saving baseball from the path it’s on towards a game without action.