Does Meat Have to Come From an Animal? Redefining Our Diet 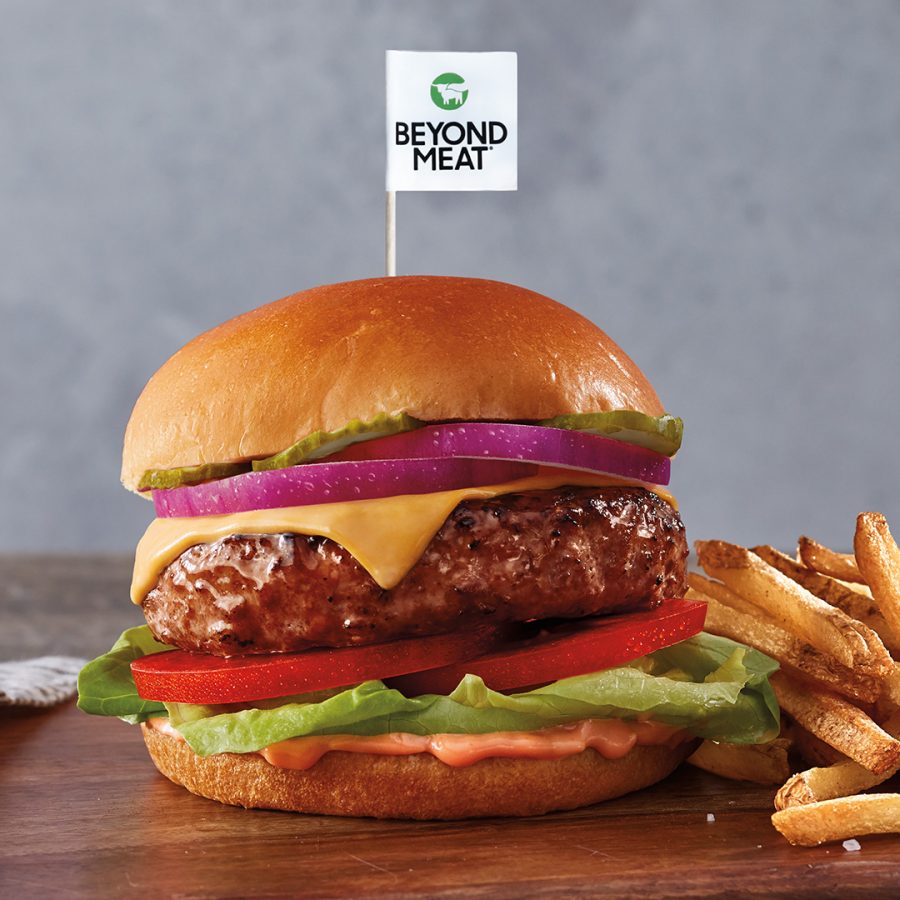 Photo courtesy of Beyond Meat.

I’ve wanted to discuss meat—specifically plant-based diets—in my writing for a long time, but I never really knew where to start. I would never want to seem pushy or preachy because food is such a sensitive but important topic.

Food is much more than what we eat. Food represents our personalities and interests, with internet jokes about even simple morning coffee. Food represents mental health, with a large portion of the population having unhealthy relationships with eating habits and weight. Food represents the class divide, with dollar hamburgers at a fast-food restaurant being infinitely more affordable than organic vegetables and fruits for most Americans.

I found the way I wanted to learn about and look at food this year while in AP Environmental Science. Unit 5 discussed land and water usage, and it was one of my favorites this semester. While many people avoid meat or meat byproducts for moral, religious, and ethical reasons, I am vegetarian for environmental reasons.

Before I discuss the definition of meat and how we consume it, I want to first lay down a base level of why this conversation is happening.

Firstly, clean freshwater is a depletable resource. While it may come out of our pipes seemingly infinitely, most of the water on earth is saltwater, which is almost completely unusable for drinking. While we can convert this to freshwater, it’s extremely expensive and not commonly done. As urbanization increases globally and the population balloons, water pollution has also increased. So what does this have to do with meat? Meat uses a lot of our finite clean freshwater. Changing to plant-based diets means saving our freshwater for human beings to drink instead of for animals we slaughter. Soy is 828% more efficient when it comes to water usage than beef, so it makes total sense to make our food out of it, rather than beef, if we need to manage our clean water supply.

All meat requires much more land than any other protein source to make the same amount of protein. Firstly, agriculture is the leading cause of issues like deforestation. But whether or not untouched forests are being turned into farmland, land, in general, is a commodity. Land is expensive, hard to maintain, and vital for farming, homes, and business. When you can generate more protein for the population using less land, the environmental ecosystem, human population, and farmworkers will all be much better off.

During the unit in which I was given these graphs and facts, we were assigned to watch different commercials from the companies behind the Beyond Burger and Impossible Burger.

In this video, the creator of Beyond Beef, Ethan Brown, said something that never left my mind. He asked what would happen if we changed how we defined “meat.” What if instead of defining it as what we get from slaughtering livestock, we defined it from a culinary perspective? What if meat was defined by its taste, smell, and texture? He said that if his Beyond Beef could serve the exact same function as beef, then it could be the same thing, just as rotary phones are basically the same thing as cell phones. Rotary phones and cell phones technologically have very little alike, but they serve the same purpose and are therefore both considered phones.

Now, every time we sat down for a meal, I felt like I was eating meat. I was still a vegetarian, but if you took out the prerequisite of meat being from an animal, my burger was suddenly a burger. Not a veggie burger. Not a made-from-plants burger. Not even a fake burger. It was simply a burger.

Instead of defining meat by what animal it came from, I now define my “fake” meat by what it does in my diet. It serves as a protein and a main course. It has a texture unlike fruits and vegetables and makes the house smell like I’m at a barbecue. I think that categorizing meat this way can open doors for those who haven’t changed their animal-based food consumption—because it can feel like they haven’t changed what they eat at all.

The planet cannot sustain us if we continue to live the way we do in America.

To be clear, I don’t mean this in a vegan-shamey way or in a doom-and-gloom way. This is simply a fact. There is certainly a large place to discuss individual actions, and the detrimental effects of thinking that individual people have caused the climate crisis, but just because we as people may not be the culprits, does not mean that we cannot be part of the solution. Twenty years ago, the first people to go vegan were considered crazy hippies. Now I buy soy-based burgers at the grocery store on sale.

Our food is going to change. The future is going to be made of much different and perhaps “weirder” food than simply a burger that tastes real but has no beef in it. As we turn to new farming methods, discuss the nutrition in insects, and revolutionize the American diet, I want us to change the way we think of meat.

But why does it matter how we think about our food? Who cares what people define meat as?

Many Americans are clinging to food of the past, to artery-clogging red meats and slaughterhouse poultry. After decades of the government subsidizing fast food and these cooperative monopolies pushing some of the most environmentally destructive diets under the guise of affordability, changing the American diet is going to take a lot more than a few plant-based meat companies.

Many Americans shame those that try and transform foods into vegan options as well, seen commonly on the internet by “Spot the Vegan” jokes and anti-salad jokes (just think of any Parks and Rec episode). And it’s not that these jokes aren’t funny or that many vegans (“Hey Vegan teacher!”) don’t deserve to be criticized for the way they’ve behaved under the guise of health, but if we want to make a more environmentally-conscious public and decrease our damage to the only rock in this solar system on which we can breathe, we’re going to have to change the definition of our food—starting with meat.