Why You Should Watch Doom Patrol 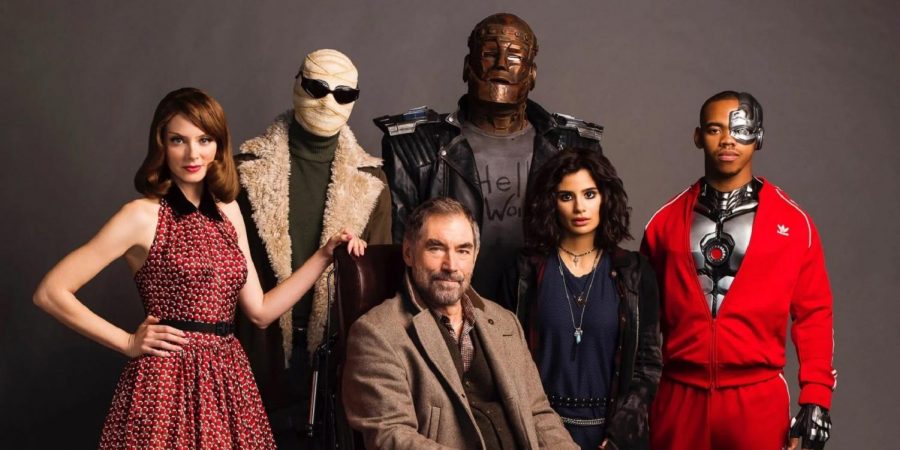 The Characters of Doom Patrol

DC’s Doom Patrol is as bizarre and strange as any television series gets, and it makes that clear from the first episode. I recently finished the first season (available on the HBO Max streaming service) and I must say, it is probably one of the most interesting, emotionally captivating, and overall greatest television series I’ve ever watched.

The show carries a balance of a dark yet lighthearted, humorous tone, which allows it to explore serious and emotionally disturbing themes while also keeping an entertainingly wacky plot filled with unpredictability. It is a surprisingly self-aware television series and thus really perfects and stays consistent with its tone, never getting overly dark and edgy or too joke-y to be taken seriously.

Doom Patrol follows a group of mentally and physically traumatized, super-powered individuals — including the likes of a robot with a human brain (or a human inside of a robot), a radioactive former pilot with a sentient spirit living inside of him, a former self-absorbed actress whose body is able to turn into slime, a woman with dissociative identity disorder and 64 different super-powered personalities, and a half-man, half-robot cyborg (literally named Cyborg) — on their journey to find their missing mentor, or “chief.” In the process, they encounter different obstacles, events, and characters that draw from their past history or trauma. Very early on we are introduced to the show’s main villain, Mr. Nobody, who is simultaneously the fourth-wall breaking narrator of the show, making for an interesting dynamic between him and the viewers whenever he’s on screen.

You might be thinking, “What differentiates this show from any other superhero show or generally any show that follows a band of misfits?” Well for one, Doom Patrol does not even take itself seriously. It doesn’t try to be a superhero show and even acknowledges it — through the commentary of Mr. Nobody of course, who is strangely entirely conscious of the fact that he is a part of the show and often pokes fun at it. The show makes it clear that the characters are not this organized team of superheroes working together, they’re a group of flawed individuals with their own separate struggles who happen to have metahuman abilities but no idea how to properly use them (with the exception of Cyborg).

They are not a crime-fighting group and they are definitely not good at what they do; they mess things up and when they do something right, it’s often not intentional. What makes the show stand out is that everything about it is so out-of-the-box and strange; it embraces its ridiculousness. For example, I’ve already mentioned the fourth-wall breaking abilities of Mr. Nobody. But even more than that, there is a donkey that serves as an interdimensional portal, a literal sentient street that talks and goes by non-binary gender pronouns, a man whose metahuman abilities involve consuming others’ facial hair, vicious walking butts, and way more than I could bother to type out.

The creativity and shock factor of the show make each scene more unpredictable and entertaining than the next, but it’s not just all complete randomness. The plot is extremely well thought out and structured and almost every major plot point or event that happens in the present connects back to the past of one of the characters in one way or another, be it through an old character from one of the characters’ old life or an event that reminds a character of old trauma. The show contains an extremely engaging and interesting storyline that’s truly unlike anything I’ve watched before; it’s as unique as it gets.

It is worth mentioning that the main characters (with the exception of Cyborg) were each saved decades ago — not at the same time, of course — by their missing chief and each of their metahuman abilities prevent them from aging like regular humans, so their histories go back relatively far into the 1900s.

What really makes the show though is the amazing character development. Throughout the season, we see each character face their inner demons and revisit their past even far beyond their respective accidents that gave them their powers. Each character has their own individual tragic backstory and the show does a great job of delving into each one in detail and really hitting the personal, emotional components. I don’t want to give up any spoilers, but there’s this one particular montage scene in which Frank Ocean is playing in the background and it is easily one of the most touching scenes in television or film that I’ve watched in recent memory.

Doom Patrol excels in character development because at its core, it’s a very human story about a group of broken individuals trying to cope with their pain and become better people before it’s a show about superpowered beings. It doesn’t rely on metahuman abilities or superhero storylines as a crutch and each personal struggle or emotional scene feels truly genuine. Seeing each of the likeable main characters grow throughout the events in the series was one of my favorite aspects of watching the show, and the character that stood out most to me personally was Larry Trainor, or Negative Man.

Every single one of Trainor’s sentimental flashback scenes — as well as seeing how his past has impacted who he is in the current day — is just heartbreaking, and he’s such a charming character that you can’t help but like but also feel bad for. Before the accident that gave him his abilities, Trainor was an American test pilot with a wife and two kids who carried a big secret: he was secretly gay and hiding an affair from the rest of the world. During one of his flights, his plane flies into an energy being called the “Negative Spirit,” causing his plane to crash and the Negative Spirit to merge into his body and reside inside of him — the origin of his powers.

The show makes it a point to emphasize that while receiving their “cursed” super-abilities through accidents made each of the main characters’ lives all the more tragic, their lives were already tragic before their respective accidents due to inner struggles. Trainor, who was seen as an American hero, struggled with having to hide his sexuality and who he really was from the rest of the world which only served to further damage his relationships with the people around him. These are the kinds of themes that Doom Patrol explores that I think really make it more than the average superhero show.