The Blue & Gold • May 20, 2021 • https://chambleeblueandgold.com/9693/opinion/mixing-politics-cryptids-and-murder-the-narrative-masterpiece-that-is-disco-elysium/

Mixing Politics, Cryptids, and Murder: The Narrative Masterpiece that is Disco Elysium 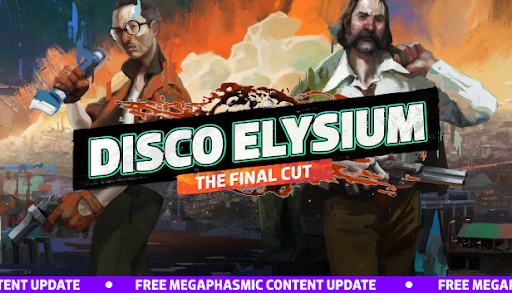 Disco Elysium is a narrative video game where you play a detective with no real authority trying to solve the murder of a mercenary, as a union strike hurtles the city of Martinaise into social upheaval. It’s beautiful. Plots following scabs, teenagers trying to start a nightclub, assassins, and cryptid zoologists wrap this artistic vision of alcoholism and political upheaval into a phenomenal role-playing experience.

*Note that this article is spoiler free, of course*

I played the original version of the game in January, but not long ago the developers released an expansion of the game, titled The Final Cut, with more plotlines, characters, and narration. You can bet I’ll be enthusiastically playing this cut the second I’ve forgotten enough of the mystery.

One of the most unique parts of the game is the voices in your head. No, you’re not crazy, they’re you. Labeled Logic, Authority,  Drama, Endurance, Perception, and more, every aspect of yourself narrates what you see and even talks to you during dialogue. Each has their own tone and opinions, giving the game a unique take on the unreliable narrator. As you gain xp, you can make certain voices or “skills” stronger, influencing the narration you get. This means that every single person who plays Disco will have a different perception of events and be given different advice.

Disco also has some of my favorite characters in video games ever. Kim Kitsuragi is your partner for the case and just a delight of a person.  He’s isn’t conventionally upbeat or positive, but he’s truly the most supportive and lovely character I think I will ever see in a game.

Another wonderful character is Egghead, one of our nightclub loving teenagers. He reminds of the Cheshire Cat, in the sense he likes to speak words that have little to no meaning, and at his core, means no harm to anyone. I could go on all day about the different characters, their intentions, and why they make the story so much better, but I think that would just be redundant at this point and spoil some hidden delights that come with them.

The game’s design is inspired by watercolor and oil-painting, which is honestly one of my favorite parts of the game. It’s so beautiful and extremely unique to me. I doubt I’ll ever see another game with its exact art style, but I hope I will.

The game is only able to tackle such hard topics as communist uprisings and alcoholism because of the authenticity the game has to the developer’s experiences. Kurvitz and Kender, two of the lead game developers, have actually helped each other escape alcoholism. After the failure of Kurvitz’s book in 2013, he was hit hard by the addiction. Kender encouraged him to turn his writing skills to the world of video games.

A Games Radar article from last year featured the developers Kender, Kurvitz, and Rostov to

discuss the making of the game, and I love their quotes to not simply paste the entire exchange below.

“Kurvitz told Kender he needed to discuss the idea [of making a video game with] Rostov. “I remember going to the door to let him in,” Rostov says. “He looked me dead in the eye and said, ‘My friend, we failed at so many things. Let us also fail at making a video game.'”

“I wasn’t going to do a video game,” says Kurvitz. “I was thinking that we’d failed in enough things and I was just going to keep drinking.” But Rostov jumped at the idea, so Kurvitz wrote a one-page synopsis which encapsulates what Disco Elysium has become in the four years since: “A D&D meets ’70s cop-show, in an original ‘fantastic realist’ setting, with swords, guns and motor-cars. Realised as an isometric CRPG – a modern advancement on the legendary Planescape: Torment and Baldur’s Gate. Massive, reactive story. Exploring a vast, poverty-stricken ghetto. Deep, strategic combat.””

The developers also describe the game as a product of Estonia, their home country. The game is heavily influenced by their experiences growing up under and then seeing the fall of Soviet Russia. In fact, it’s still shaping their lives. During the development of the game, some developers moved away from Estonia due to the threat they felt Russia posed to the region.

“No-one will travel to Estonia because everyone thinks the Russians will come, that Narva [the city on the Estonian-Russian border] will be next and there will be nuclear war in Estonia,” said Kender in an interview with James Batchelor.

The game is not meant to represent Estonia though, or provide true commentary or one point of view on one particular issue. Later in the interview with James Batchelor, Kender said it’s simply meant to discuss the ideas of ideologies and geopolitics in a lifelike setting.

“We’ve actually seen really chauvinist types of guys who prefer to play a feminist cop, because they really want to know what it’s all about. In the game we have something called a Thought Cabinet – it’s like an inventory for your thoughts. So you can develop thoughts there and that changes the dialogue and actions in the game. Each time you play you can develop a different type of character with totally different ideas.”

The game’s developers themselves reflect this idea of not making political statements, but instead developing themes that they all deal with.

“We have all sorts on the team: feminists, liberals, entrepreneurs, socialists,” Kender says. “We’re still all human beings, we’re not all that different

Disco Elysium is a video game for everyone, utilizing every aspect from the art to the gameplay to the writing to make the most thought provoking and entertaining experience possible. Revolving around your choices in the story and having no-need for skill with a controller or mouse, it can allow you to explore the impacts of communism, anarchism, and authoritarianism in a fictional city that so easily reflects humanity. And in-between these themes, you’ll get to solve more than one mystery, meet a fantastic cast of characters, and aid an elderly couple on their search for magical cryptids.