Pegs and Jokers: My Favorite Underrated Board Game 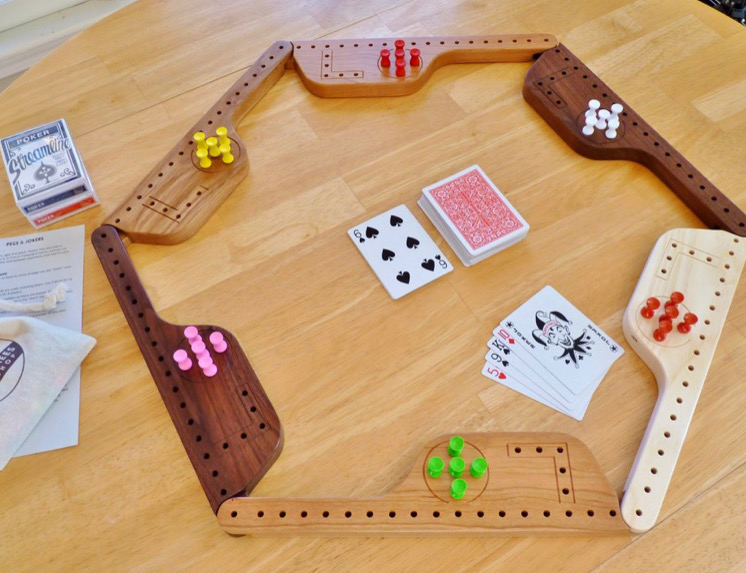 Just like everyone else, over this pandemic, I’ve picked up new hobbies and ways to pass time; one of those being board games. Specifically, Pegs and Jokers. It’s sort of a rendition of the game Sorry, where two to four players go around the board trying to get their pieces home before anyone else. In Pegs and Jokers, you usually play with teams instead of individually, which can make for an even more competitive (and stressful) game night. You also play with four decks of cards (you always have 7 cards in your hand), and each card has a different purpose.

Any face card can either bring one of your pieces on the board, or it can move the piece ten steps forward (along with a 10 card). The same concept goes for aces, twos, threes and so on. However, a seven means that you can split the moves between your pieces, but only going forward. For example, if I have two pieces on the board and one piece is 3 pegs away from being in its castle, I can use the seven to move that piece 3 pegs and the other piece 4 pegs forward. An eight means that you must move your piece eight pegs backwards. A nine splits the same way a seven does, except one piece must move forward and the other must move backward. Once all your pieces are in their castle, you can use the split cards to help your partner finish the game.

Lastly, there are jokers (hence the name of the game). When you put down a joker, it basically switches the position of one of your pieces with another player’s piece. If you want to switch with one of your opponent’s pieces, your piece goes in their place and their piece goes back to the start, where they need a face card to get it back out on the board. The strategy comes with whether you want to send your opponent back, or whether you want to help your teammate. If you choose to help your teammate, you take the place of their piece and their piece goes directly in front of their castle. This same concept applies when you put down a certain card, and your piece lands on someone else’s piece. My favorite part about this game is that each round takes 45 minutes to an hour, which means a two out of three competition can take a few hours.

The last time we played, it was me and two other friends versus one of the friends’ parents and aunt. A slight thing to keep in mind was that this friend is probably the most intensely competitive person I have known and will ever know. That’s another beauty of this game- there is strategy involved, but a lot of the game is really the luck of the draw. No one can dominate one another and anyone can win. Before this day, I used to be terrible at the game as I would be far too stingy with my jokers and good cards, and by the time I decided to use them, it was already too late. I didn’t really expect to win any of the games since the standards were so low for me, but I decided I wouldn’t have a joker in my hand for more than 3 turns. A big part of the game is helping your teammates, even when it doesn’t put you in the best position sometimes. Nonetheless, the night of yelling with joy and anger commenced.

The first game, we wiped out our opponents within 30 minutes, which is crazy quick for this game. But again, luck of the draw. In the next game, we lost in a tight, hour-long game that felt way more devastating than it should’ve been. During our last game, we knew we had to win because of how cocky we were acting, and how much they’d be in our faces if we lost. It truly came down to one card this game- one of my friends and I had already gotten all of our pieces into their respective castles, and we were helping our last teammate get his last piece in.

However, the other team was in this exact same position. The tension in the room was so intense, it was dead silent. It felt like we were in a testing room of some sort. It was my friend’s turn, and he was three pegs away from winning the game with his last piece. Me and my other friend were incredibly nervous, since we only had high cards and eight’s that we didn’t want to use, as they would send his piece backwards and away from his castle. Our opponents felt similar pressure; their last piece was a face card away from winning. By the looks on their faces, we could tell that if we didn’t win on our turn, the game would’ve been over.

My friend and I looked at each other while our opponents attentively stared at the third person in our team. I didn’t think he had the card to win us the game. He looked up from his hand with a subtle smirk on his face, which confused me because he usually bluffs in this position. He dramatically raised the desired card in the air, just to slowly put the three of hearts down to win us the game.

If you have competitive friends, I recommend this game over anything else. Buy it. You will not regret it.